Welcome to Online Reasoning Section with explanation in AffairsCloud.com. Here we are creating Best question samples from Puzzle with explanation, which is common for competitive exams. We have included Some questions that are asked in previous exams !!!

Q (1-5). Study the given information and answer the following questions. 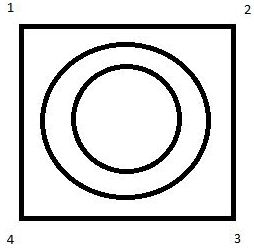 Eight friends- Pravin, Qadir, Rohan, Satwik, Tilak, Umesh, Vinay and Wasim are sitting in the innermost circle. All of them are facing towards the center.
Number of persons sitting between Pravin and Qadir is same as the number of persons sitting between Satwik and Rohan. Three persons sit between Umesh and Wasim. Vinay sits to the immediate right of Rohan. Wasim sits second to the right of Tilak. Satwik sits third to the left of Tilak. Wasim is an immediate neighbor of Pravin.
They shuffled a pack of cards. Pravin draws the first card and changes his position according to the given conditions, In clock-wise remaining persons also draw cards and change their positions accordingly.
Conditions:
1. If the card drawn is Heart, the person moves to outer circle (same position) facing center.
2. If the card drawn is Spade, the person moves to outer circle facing center and moves two positions left.
3. If the card drawn is Club, the person who draws first moves to corner 1 of Square facing away from center, further if persons draw diamond they have to move to corners 2, 3 and 4 respectively facing away from the center.
4. If the card drawn is Diamond, the person remains in the same circle but faces away from center.
Draws:
1. Pravin draws 10 of Club
2. Qadir draws Ace of Diamond
3. Rohan draws Queen of Heart
4. Satwik draws 7 of Diamond
5. Tilak draws 4 of Club
6. Umesh draws 3 of Heart
7. Vinay draws Ace of Spade
8. Wasim draws 9 of Spade