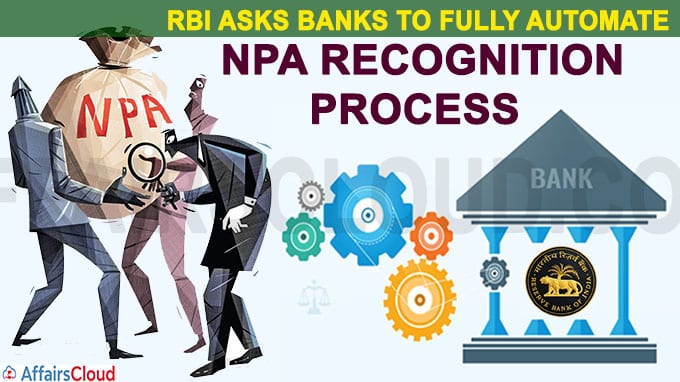 In August 2011, the Reserve Bank of India (RBI) issued circular advising banks to switch to automatic identification of non-performing assets (NPAs), using appropriate IT (information technology) systems, from manual identification for regulatory reporting and bank’s own management information system (MIS) requirements. However, over this period of time, the processes for NPA identification, income recognition, provisioning and generation of related returns in many banks are not yet fully automated.

-Accounts Coverage: All borrower accounts, including temporary overdrafts, irrespective of size, sector or types of limits, should be covered in the automated IT-based system for asset classification.

–Calculation of provisioning requirements shall also be System based as per pre-set rules captured in the System.

–The System will handle both down-grade and upgrade of accounts through Straight Through Process (STP) without manual intervention.

-Banks should also be able to generate classification status report at any given point of time with actual date of classification of assets as NPAs/Non-Performing Investments (NPI).

-Exception: RBI noted that banks should not resort to manual-intervention-based asset classification processes. However, in any exceptional circumstance where manual intervention is required, it must have at least two level authorization as per the board-approved policy of the bank. Such intervention is subjected to audit by concurrent and statutory auditors.

–In case a separate application outside the core banking system is used for NPA classification, the system must have access to the required data, and investment accounts should be updated back into the CBS (core banking solution) automatically.

-According to the Financial Stability Report released by the Reserve Bank of India (RBI) on July 2020, the Central Bank predicts that the Gross Non Performing Assets (GNPA) ratio of all scheduled Commercial Banks (SCBs) may increase from 8.5 per cent in March 2020 to 12.5 per cent by March 2021.

-If the Macroeconomic environment gets affected further due to pandemic then the ratio of GNPA may further climbs to 14.7 per cent.

An asset which includes leased asset becomes non-performing when it stops to make income for any financial organisation or banks.A ‘non-performing asset’ (NPA) was defined as a credit facility in respect of which the interest and/ or instalment of principal has remained as ‘past due’ for a specified period of time.

A loan is classified as Non-Performing Asset when it is not being reimbursed by the borrower and couldn’t generating income for the lender or bank because of the unpaid interest by the borrower. In such a case, the loan is considered “in arrears” or “Outstanding”.

In general, loans become NPAs when they are outstanding for 90 days or more.

Borrower will receive a grace period before classifying an asset as non-performing. Later, bank will categorize the NPA into one of the following sub-categories:

On August 12, 2020, RBI mandated the urban co-operative banks (UCBs) with assets of Rs 2,000 crore or above as on March 31, 2020 to implement system-based asset classification from 30 June 2021. For UCBs having total assets of Rs 1000 crore or above but less than Rs 2000 crore as on March 31, 2020 and have self-assessed under Level III or Level IV on “Comprehensive Cyber Security Framework for Primary(Urban) Cooperative Banks (UCBs) – A Graded Approach” are mandated to implement it from September 30, 2021.