As per rankings released by business magazine ‘Fortune’, Qatar is World’s Richest Country in terms of Gross Domestic Product (GDP) Per Capita.

Richest Countries in the World – Overview:

GDP Per Capita is a measure of the total output of a country computed by dividing gross domestic product(GDP) by the number of people in the country. In theoretical terms, higher per capita GDP results in to a higher standard of living. 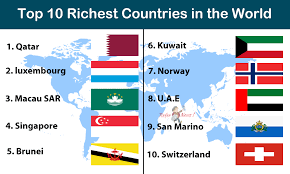 Richest Countries in the World – Top 15