On January 29, 2018, Union Finance Minister, Arun Jaitley tabled the Economic Survey 2017-18 in Parliament. Economic Survey is a flagship annual document of the Ministry of Finance, Government of India. 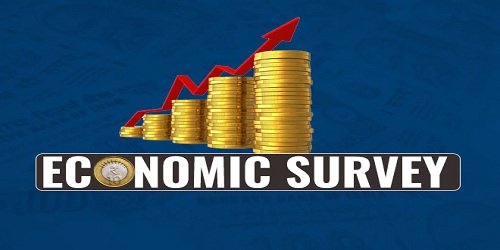 Economic Survey has revealed that average consumer price inflation based headline inflation declined to a six-year low of 3.3 per cent in 2017-18.

During April-November 2017 period, direct tax collections of the Centre grew by 13.7 per cent, which is in line with previous year.

During April-November 2017 period, indirect tax collections of the Centre grew by 18.3 per cent, which is in line with previous year.

Top 1% Indian exporters account for only 38 percent of exports. This proportion is much higher in other countries – 72, 68, 67, and 55 % in Brazil, Germany, Mexico, & USA, respectively

Bridging the gender gaps in education, skill development, employment and earnings and reducing social inequalities have been outlined as underlying goals of the development strategy.

Economic Survey has warned that Climate change could reduce annual agricultural incomes in the range of 15 percent to 18 percent on average, and up to 20 percent to 25 percent for unirrigated areas.