Hello readers, we’ve already provided the complete overview of Union Budget 2020-2021, now here comes the another important topic for upcoming examinations i.e. Economic Survey 2019-20 which was presented one day prior to the Union Budget 2020-2021. We urge you to read each and every point of the National Democratic Alliance (NDA) government’s economic survey. On 31st January 2020, Union Minister for Finance & Corporate Affairs, Smt. Nirmala Sitharaman presented the Economic Survey 2019-20 in the Parliament predicting India’s GDP (Gross Domestic Product) to be 6-6.5% in 2020-2021. This economic survey influenced by Kautilya’s Arthashashtra, has presented the “Thalinomics”– an attempt to relate economics to the common person using something that he or she encounters every day – a plate of food i.e. a Thali. As per survey,the affordability of a vegetarian thali improved by 29% between 2006-07 and 2019-20 and that of a non-vegetarian thali by 18% over the 13-year period.

Point to be noted: Arthashashtra, written by Kautilya is a treatise on economic policy, statecraft and military strategy. The treatise is estimated to have been completed around the 2nd century BCE (Before Common Era). 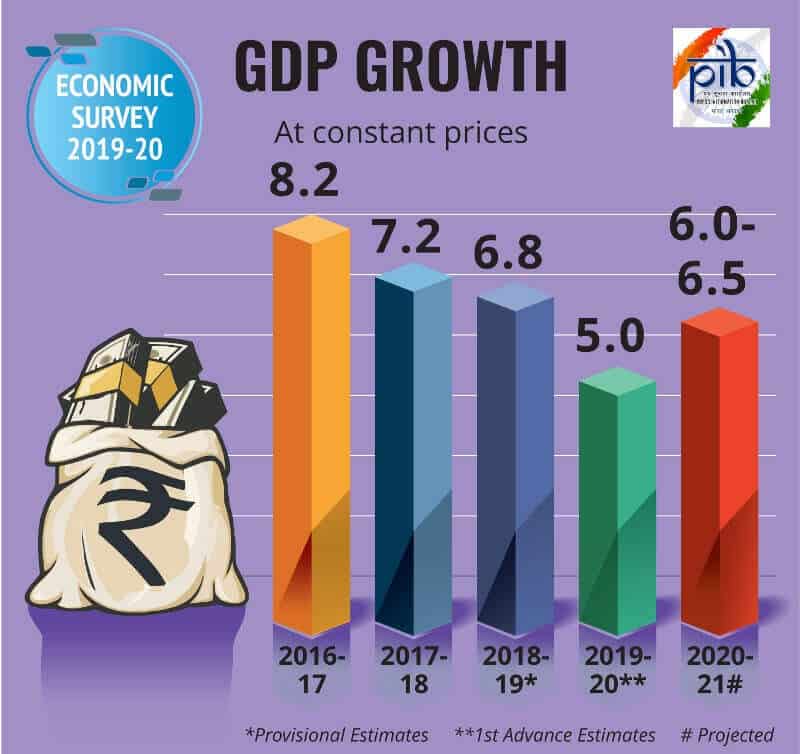 The Economic Survey, which is a detailed report card on the Centre’s economic performance through the year and future projection on the country’s growth has been prepared by the Economic Division, Department of Economic Affairs,  Ministry of Finance under the guidance of Chief Economic Adviser, Ministry of Finance, Krishnamurthy V. Subramanian in a period of 6 months. It is a collaborative effort of all Ministries and Departments of Government of India including researchers, consultants and think tanks both within and outside the government. The Economic Survey 2019-20 has also sourced certain data from Wikipedia, which is not considered as reliable source of information.

v.The industrial growth for the current year has been listed as 2.9% while the agricultural growth is 2.8%.

vii.India has become 2nd Largest Emerging Green Bond Market after China. The State Bank of India(SBI) entered the market with an US$650 million Certified Climate Bond. India also joined the International Platform on Sustainable Finance (IPSF) in 2019 to scale up the environmentally sustainable investments.

ix.Decline in inflation: Declining inflation from 3.2% in April 2019 to 2.6% in December 2019, reflecting weakening demand pressure in the economy.

x.GST Collections: GST collections grew by 4.1% for the centre during April-November 2019. Gross GST monthly collections have crossed the mark of Rs. 1 lakh crore for a total of five times during 2019-20.

xviii.Under trade facilitation, India improved its ranking from 143 in 2016 to 68 in 2019 under the indicator, “Trading across Borders”, monitored by World Bank in its Ease of Doing Business Report.

xix.Logistics industry of India: Currently estimated to be around US$ 160 billion it is expected to touch US$ 215 billion by 2020. According to World Bank’s Logistics Performance Index, India ranks 44th in 2018 globally, up from 54th rank in 2014.

–Metro facility: The metro facility in India has been expanded to 18 cities. So far, 670 km Metro lines have been commissioned and work is on to expand it to 930 km.

–Medical colleges: This year, 75 new medical colleges have been approved in the country. This will increase the total number to 16,000 MBBS medical and over 4,000 PG seats

–PM-KISAN: Under Prime Minister Kisan Samman Nidhi, more than Rs 43,000 crore has been deposited in the bank account of over 8 crore farmer familie

–Increase in houses completion under PMAY-G: The two Schemes, Pradhan Mantri Awaas Yojana- Gramin (PMAY-G) and Pradhan Mantri Awaas Yojana- Urban (PMAY-U), seek to achieve the target of housing for all by 2022. Under PMAY-G, the number of houses completed in a year increased by more than four times, from 11.95 lakh in 2014-15 to 47.33 lakh in 2018-19,

–Open Defecation Free: All Urban areas of 35 States/UTs have become ODF and percentage of waste processing rose from around 18 percent to 60 percent.

–Services Sector: It accounted for about 55% of the economy and Gross Value Added (GVA) growth, two-thirds of total FDI inflows into India and about 38% of the total exports. The sector’s share now exceeds 50$ of the Gross State Value Added (GSVA) in 15 out of the 33 states and UT.

–Improvement in Space Sector: India’s space programme has grown exponentially since its modest beginnings five decades ago, moving from simple mapping services to many more uses currently. Even though India’s spending is less compared to others, ISRO has launched around 5-7 satellites per year in recent years with almost no failures.

Economic Survey further states that fisheries remain an important source of food, nutrition, employment and income in India. It has been showing a steady growth in the total GVA and accounts for 6.58 per cent of GDP from agriculture, forestry and fishing

Livestock sector and Others:

livestock sector growing at a compound annual growth rate of nearly 8 per cent over the last five years, It has become an important secondary source of income for millions of rural families and plays an important role in achieving the goal of doubling farmers’ income.

Creating Jobs and Growth by Specializing in Network Products

Strategic disinvestment of Government’s shareholding of 53.29 per cent in Hindustan Petroleum Corporation Limited (HPCL) led to an increase of around Rs. 33,000 crore in national wealth.