Punjab State Cabinet has approved the “Connect with Your Roots” (CYR) programme to reach out to youngsters of Punjabi origin whose parents, grandparents or great grandparents have settled abroad. 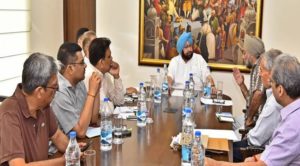 Punjab State Cabinet has given its approval for a state-of-the-art Cloud-based National Generic Document Registration System (NGDRS), an online interface for citizens to register revenue-related documents across the state.