President Kovind was the chief guest of the statehood day celebrations organized by Jharkhand State Government. 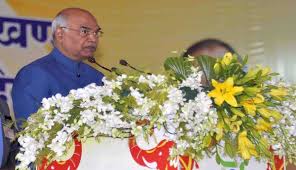