As per ‘India State-level Disease Burden Initiative Report’, child and maternal malnutrition was responsible for 15 per cent of the total disease burden in 2016 across India.

The report was released by Vice President M. Venkaiah Naidu on November 14, 2017.

As per the report, prevalence of child and maternal malnutrition is higher in ‘Empowered Action Group’ States and Assam. 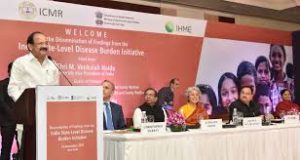