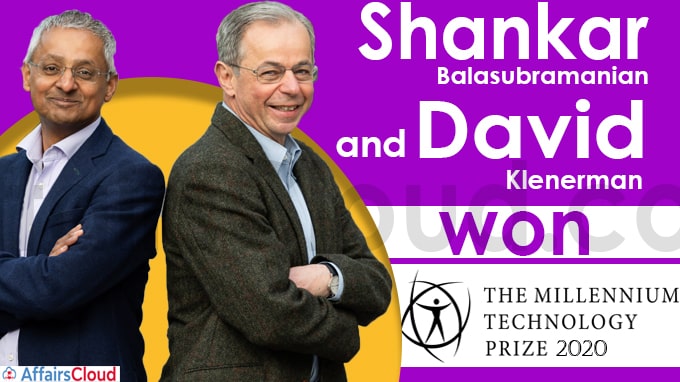 The 2020 award marks the first time where the award is presented to more than one recipient for the same innovation.

About the Millennium Technology Prize:

i.The Millennium Technology Prize was instituted by the TAF in 2004 which is awarded at an interval of 2 years.

ii.The award highlights the extensive impact of science and innovation on the wellbeing of society. The award carries a cash prize of 1 million euro (around Rs. 8.9 crores).

iii.Sir Tim Berners-Lee received the award in 2004 for his discovery of the World Wide Web.

i.Shankar Balasubramanian is an India-born British professor of medicinal chemistry and David Klenerman is a British biophysical chemist.

ii.They are the co-founders of the company – ‘Solexa’, to make technology more broadly available to the world.

i.The method of NGS involves fragmenting sample DNA into many small pieces that are immobilised on the surface of a chip and locally amplified.

ii.Using the NGS technology, the human genome can be sequenced in one day at a cost of 1000 USD.

iii.This also provides a better and quick understanding of the diseases.

Ranger Mahinder Giri of Rajaji Tiger Reserve(RTR) became the only ranger from Asia to win the prestigious New International Ranger Award for his efforts towards reducing the human-wildlife conflict in and around the RTR and his role in trigger translocation exercise from Corbett Tiger Reserve to RTR.