Prime Minister Narendra Modi was on an official visit to Israel from 4th to 6th July 2017.

During his Israel visit, PM Modi visited the Danziger “Dan” Flower Farm along with his Israeli counterpart Benjamin Netanyahu in Mishmar Hashiva where they were briefed about the latest technologies being used for floriculture. 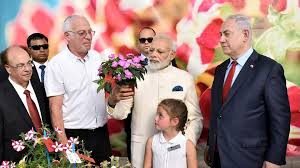 PM Narendra Modi’s visit to Israel from 4th – 6th July, 2017 was the first ever visit of an incumbent Indian prime minister.

On July 4, 2017, India’s Mahindra Telephonics and Israeli firm Shachaf Engineering signed a MoU to collaborate on design, development and manufacture of strategic electronics for military use.

India, Israel resolve to fight menace of terrorism and radicalism

India and Israel have agreed to cooperate to protect their strategic interests and called for strong measures against terror groups and their sponsors.

On July 4, 2017, Prime Minister Narendra Modi gifted his Israeli counterpart Benjamin Netanyahu replicas of two sets of relics from Kerala, regarded as key artefacts of the long Jewish history in India. The gift comprise two different sets of copper plates that are believed to have been inscribed in 9-10th Century.

India and Israel elevated their ties to the “strategic partnership” level with a vow to do much more together to combat growing radicalisation and terrorism and pitched for strong measures against those financing and providing sanctuaries to terror groups.

In a bid to enhance people-to-people contacts between India and Israel, Prime Minister Narendra Modi has announced the setting up of an Indian Cultural Centre in Israel.