On February 9, 2018, Prime Minister Narendra Modi travelled from New Delhi to Jordanian capital Amman and took a chopper ride to reach the Palestinian city of Ramallah.

PM conferred ‘Grand Collar of the State of Palestine’

On February 10, 2018, Indian Prime Minister Narendra Modi was conferred the ‘Grand Collar of the State of Palestine’ by Palestine President Mahmoud Abbas.

On February 10, 2018, India and Palestine signed following six agreements in different areas including health and education:

India to invest $50 mn to boost capacity building in Palestine

On February 11, 2018, Prime Minister Narendra Modi inaugurated a project for the construction of the first Hindu temple in Abu Dhabi. 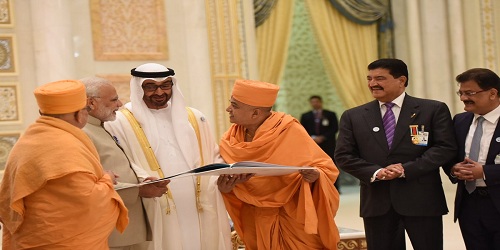 As per a joint statement issued on February 11, 2018, during PM Modi’s visit to UAE, India and the UAE have agreed to start joint development projects for third countries, including in the war-torn Afghanistan.

On February 11, 2018, PM Modi landed in Muscat, the capital Oman and begun the last leg of his three-nation tour. 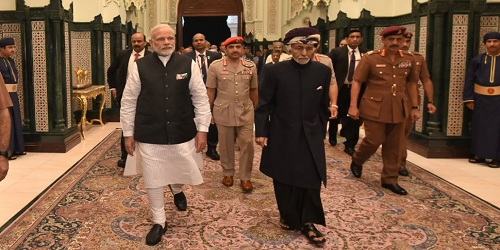 On February 12, 2018, PM Modi met industry leaders of the Gulf and West Asia region at the India-Oman business meeting in Muscat.