On December 16, 2019 the president of India Shri Ram Nath Kovind approved the Arms (Amendment) Bill, 2019 for a maximum punishment of life imprisonment for manufacturing and carrying illegal arms. After his assent, the bill became an act with effect from December 14, 2019.  The act was brought to check the acts of terrorism and insurgency and use of illegal arms, which is in favour of the common people. The act aims to provide effective deterrence against violation of law. 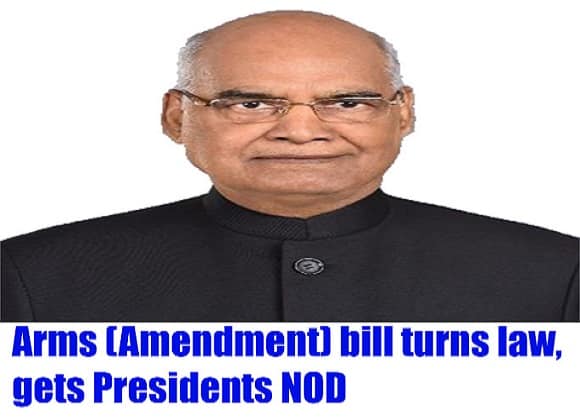 iii.Future plans: Govt plans to introduce bullets with serial numbers in future, so as to keep bullets accounted and traceable.

iv.Portal designed: A new portal is also being developed which would act as one stop platform to access information on arms licenses issued, license holders and the ammunition used. The portal would house National Database on Arms License (NDAL) and Arms License Issuance System (ALIS).

v.Death by arms: India ranked 3rd in no. of suicides committed with guns where even licensed arms are being put to the wrong use. In order to prevent these activities Arms Act was passed.