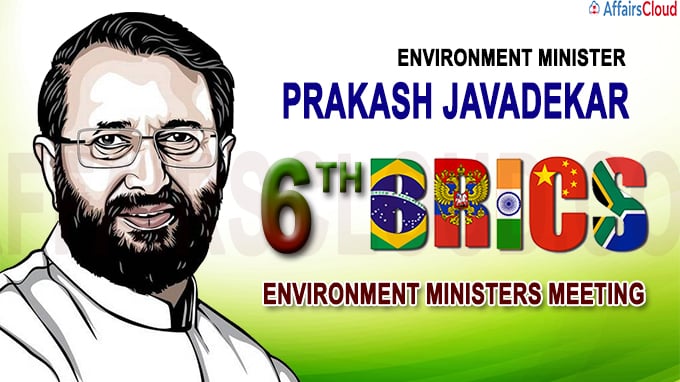 The Ministers of Environment from BRICS countries, Brazil, Russia, India, China and South Africa participated in the meeting.

i.Prakash Javadekar, the need to implement the initiatives under BRICS and the implementations of BRICS MoU.

ii.He offered that India could provide a platform to showcase the best environmental management practices of BRICS Countries.

iii.He mentioned that sharing of the best practices among the BRICS nations will support in achieving the Sustainable Development Goals.

v.He also stated that Equity, Common but differentiated responsibilities, finance and technology partnership are the key components to achieve the goals of climate change mitigation and adaptation and India is working towards achieving its Climate commitments and Paris Agreement on Climate change.

The BRICS Environment Ministers established BRICS Environmentally Sound Technology (BEST) Platform and observed that it is of fundamental importance that we develop existing areas of development within the BEST Platform, setting clear expectations in terms of the results.The BEST Platform, which was set up virtually, could serve as an invaluable mechanism to facilitate the exchange of information views and sharing of the best practices on BRICS countries including post COVID-19 environment/sustainable development recovery programmes.

i.The COVID-19 pandemic has increased the social vulnerability which resulted in significant job losses and unemployment.

ii.Due to the global pandemic the climate change negotiations have been delayed and the 26th Conference of Parties to the United Nations Framework Convention on Climate Change (UNFCCC COP26) will be held in November 2021.

iii.The nations acknowledged that COP26 offers the opportunities for the countries to work together and share the knowledge on the climate positive economic recovery package.

iv.The 15th Conference of the Parties to the Convention on Biological Diversity (CBD COP15) which was scheduled to be held in October 2020 in Kunming, China was postponed due to the global pandemic.