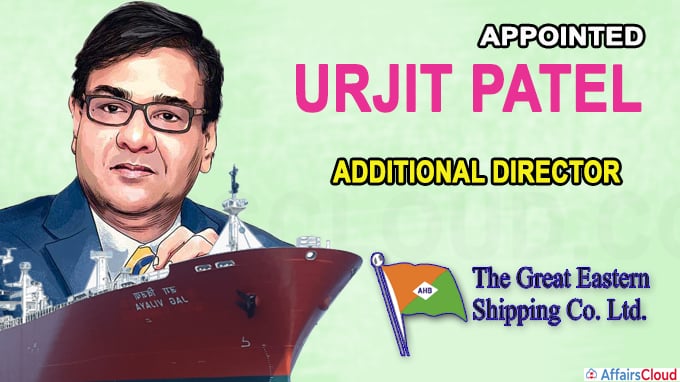 On July 30, 2020 Great Eastern Shipping Company Ltd announced that its board has appointed former Reserve Bank of India(RBI) Governor Urjit Patel as an additional and independent director for a term of 5 years, effective from August 01, 2020.

Current Position held– He was appointed as the Chairman of the Governing Body of the National Institute of Public Finance and Policy (NIPFP) for a 4 year term on June 22, 2020.

i.Prior to this he took charge as the 24th Governor of the RBI on September 5, 2016. He resigned in December 2018 before completing his three-year term in September 2019.

ii.He has been a consultant to the Ministry of Finance, Government of India.

iii.He has also worked with several High-Level Committees at both Central and State Government levels.

iv.He started his professional career at the International Monetary Fund (IMF) as an economist in 1990.

v.He has authored a book titled ‘Overdraft: Saving the Indian Saver’. The book will be published by HarperCollins India.

i.Krishnendu Majumdar, the 1st Indian origin from UK appointed as Chair of British Academy of Film and Television Arts(BAFTA).

ii.Volkan Bozkir Becomes the 1st Turkish to be Elected as the President of 75th UN General Assembly