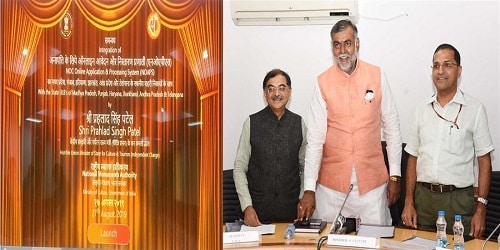 Key points:
i. 6 new States will be part of this Integrated Online Application Portal with 517 urban Local Bodies Count. The list of States and Urban Local Bodies are as follows,
Madhya Pradesh (378) , Andhra Pradesh (110) , Haryana (15) , Punjab (10), Jharkhand (3) , Telangana (1)
ii. This will help to automate the process of grant of NO Objection Certificate(NOC) for construction-related work in the prohibited and regulated area of ASI(Archaeological Survey of India) protected monuments.
iii. This system was available only in 5 urban local bodies of Delhi and 1 urban local body of Mumbai earlier.
iv. The Portal has integrated with the Mobile App of ‘Smarac’ of Indian Space Research Organization (ISRO), through which the applicant traverses his plot and the geo-coordinates of his plot along with the images to be uploaded into the NIC portal along with the proximity and the approval status.
v. National Monuments Authority (NMA):
It is under the Ministry of Culture, Government of India(GoI) has been set up as per provisions of The Ancient Monuments and Archaeological Sites and Remains AMASR (Amendment and Validation) Act, 2010, which was enacted in March 2010.