Pradhan Mantri Jan Dhan Yojana is a nationwide scheme. The motto of the scheme is to provide bank account to every individual. The Prime Minister Narendra Modi introduced the scheme in his Independence Day speech on 15th August 2014. Later, he then officially launched on 28th August 2014.

PMJDY is operated by Department of Financial Services under Finance Ministry.

PMJDY divides the country into Sub Service Areas (SSA). Every SSA covers 1000 to 1500 houses. It also provides a banking outlet for each household within 5 kms. SSA – PMJDY divides the country into Sub Service Areas (SSA). Every SSA covers 1000 to 1500 houses. It also provides a banking outlet for each household within 5 kms.

If the citizen opens the account before 26th January 2015, he gets an additional insurance cover of Rs 30, 000. And if the credit history of the account holder is good, he gets an overdraft of   Rs 5, 000.

Under this part of the scheme, the government has planned to conduct special awareness programmes. The programmes focus on educating the people about banking and its necessities. The PMJDY scheme has an assured Credit Guarantee Fund. This fund covers the possible defaults in terms of operations, savings and credit history. The government names it the Overdraft amount and is made available only to one member of a family, preferably the lady member.

Under the scheme, the account holder can also buy an insurance product, loan or even FDs and RDs.

Direct Benefit Transfer. PMJDY replenishes the schemes like Swavalmban and Swabhimaan by closing the subsidy leakages between the government and the public.

A person without any official documents can also open an account under the scheme. In such cases, the bank authenticates him only with his photo and signature. Such accounts are called small accounts.

RBI has put the following restrictions on the small account holders As PMJDY opened 11.5 crore bank accounts in one week, it made a record in the Guiness world book. The scheme crossed the target of 10 crore accounts and covered 99.74 % of the households (according to Times of India). The achievement happened in a very short time period, between 2rd August 2014 and 29th August 2014.

As of January 27 2017, about 12.51 crore bank accounts were opened under the scheme. On the top, deposits on these accounts collectively crossed 10, 000 crores. However, the same survey reports that majority of the accounts are from the urban areas. This clearly 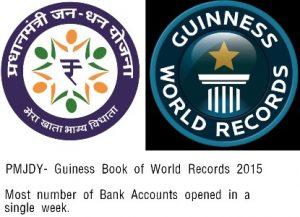 implies, accounts in rural areas are still with zero balance. With prolonged persistence of this situation, the zero balance accounts will eventually become dormant.

If these conditions persevere, the plans of Government to make DBT (Direct Benefit Transfer) will be at stake!

Bank Mitr : The scheme has a representative at every bank called the “Bank Mitr”. They work only for the PMJDY customers. Bank Mitrs are employed on low commission. The government gives priorities in employing retired professionals of banks, schools and army are employed as Bank Mitrs. Citizens of 18 years and above are also employed.They are given special training to expand bank’s operation to remote and

The government of India launched various schemes to help people directly. The schemes work with no intermediate corrupt officials. It transfers the money directly to the beneficiary from the government bank account.

To succeed in such a big arena, it is mandatory that every citizen has to own a bank account in order to enjoy the scheme’s benefits completely.

Hence, launch of PMJDY is a great initiative to accomplish every foot step of the governments’ in the path of development of the country. Without PMJDY, direct transfer of money becomes impossible and the old corruptions and long waiting queues and the intermediate corrupt officials come to existence.

The UPA government launched Swabhimaan in 2011. Unfortunately, the scheme covered 74, 000 villages out of 5.92 lakh villages. The two main differences between the schemes is that

Swavalamban was a pension scheme launched by the UPA government in the 2010 – 11 Budget. According to the scheme, an individual can contribute a minimum of Rs 1000 to a maximum of Rs 12,000 per year towards the scheme. And later, the individual collects the net amount as a retirement amount from the government along with the other retirement benefits.

To get a large insurance amount and the overdraft facilities, same person might open multiple accounts with multiple banks. This becomes possible with different ID proofs; aadhar card in one bank and PAN card in the other. The pressure from the Government is with the numbers and not in maintaining the numbers.

Hence, a single information sharing system has to be implemented to weed out the multiple account holders.

The foremost condition of the scheme is that, to keep the account in active condition, the account holder has to use the RuPay debit card once in 45 days. This is next to impossibility in rural areas where ATM are opened once in a while.

Bank Mitr gets 2 % commission on each transaction. Hence their monthly income rounds to a number a Rs 2000. Bottomline, they easily tend to lose interest and make this as a side business.

RBI says 47 % of the BCAs are unavailable when their customers need them.

In another point of view, they might demand extra money to open an account of zero balance. And charge separate loan commissions outside the bank’s knowledge.

Quiz on PMJDY – Test yourself