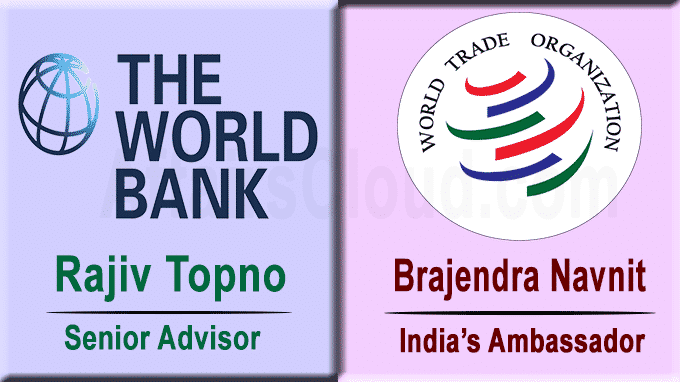 On June 4, 2020 Cabinet’s Appointment committee approved the appointments of Rajeev Topno, the private secretary to the prime minister as Senior Advisor to the Executive Director(ED), World Bank & Brajendra Navnit, the Joint Secretary in the Prime Minister’s Office(July 2014 – September 2019) as Ambassador and Permanent Representative of India(PRI) to the World Trade Organisation(WTO) & will be posted at the Permanent Mission of India(PMI) to the WTO, under the Department of Commerce. He replaced JS Deepak at the PMI whose two-year extended term ended on May 31.

Rajeev Topno is the 1996 batch Gujarat cadre IAS officer, he joined the PMO as a deputy secretary in 2009. He handled key portfolios such as telecom and ports at the PMO in the United Progressive Alliance(UPA)-2 government.

i.Ravi Kota, a 1993 batch IAS officer of Assam-Meghalaya cadre appointed as Minister (Economic) at the Indian embassy in Washington(Joint Secretary-level post), under the Department of Economic Affairs (DEA). He is currently serving as joint secretary in the 15th Finance Commission under the DEA.

ii.Lekhan Thakkar, a Central Secretariat Service (CSS) officer, appointed as Counsellor (Economic) at the Indian Embassy in Beijing, China(director level), under the Department of Economic Affairs.

iii.H Atheli, a 2000 batch officer of the Indian Civil Accounts Service(ICAS), will be Advisor (Director level) to ED, Asian Development Bank(ADB), Manila, Philippines, under the DEA.

iv.Anwar Hussain Shaik, a 2000 batch officer of the Indian Railway Traffic Service(IRTS) appointed under Brajendra Navnit as the Counsellor in the PMI to the WTO. The Director-level post is under the Department of Commerce.

v.N Ashok Kumar, a 2004 batch IAS officer of Manipur cadre appointed as Advisor (Industry and Engineering) in the Indian Embassy in Brussels. The Director-level post is under the Department of Commerce.

Note: Tenure of all appointments is 3 years.