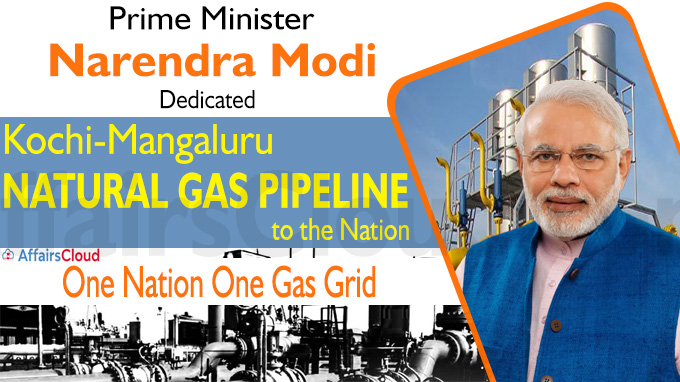 i.The PM cited the inauguration of the pipeline as a step towards Government’s ‘One Nation One Gas Grid’.

Gist of the project:

iv.The construction of the pipeline has created around 12 Lakh man-days of employment.

The project was launched in 2009 and was originally expected to be completed in 2014.

i.The pipeline is set to become the base of the Gas Distribution System in many cities and will form the base of CNG based transport systems in these cities.

iii.From 2014, work is under progress for the construction of around 16, 000 Kms of gas pipeline which will be completed in the next 5-6 years.

iv.Due to an increase in piped gas connections, many States & Union Territories like Haryana, Punjab & Andhra Pradesh have declared themselves kerosene free.

i.Government plans to increase the share of natural gas in the energy sector from the present 6% to 15% by 2030.

ii.It has also set a target of ethanol blending in petrol upto 20% in 10 years.

i.Under the Blue Economy, ports and coastal roads are being connected to turn the coastal region into a role model of ease of living & ease of doing business.

iv.The construction of the World’s largest Hybrid Energy Plant (wind & solar) is also under progress in the Kutch Region of Gujarat.