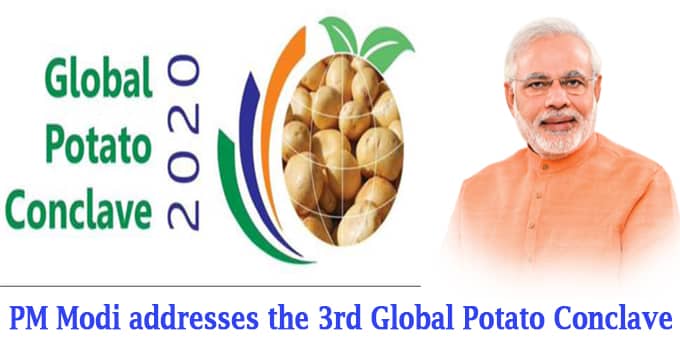 3 major events are also being witnessed in the event. They are Potato Conference, Agri Expo and Potato Field Day.

i.Conclave aim: The conclave is organised to make the participants exposed to the frontiers of knowledge and to enhance innovation in potato research. During the conclave, scientists, potato farmers and other stakeholders from around the world are participating where important topics related to food and nutrition will be discussed.

iii.Themes: The 3rd edition of the potato conference is based on 10 themes out of which 8 themes are based on basic and applied research. The 10 themes are

vi.Previous editions: The previous two Global Potato Conferences were organized in 1999, and 2008.

i.Doubling farmers’ income: India is among the top 3 countries in production of various cereals and other food items as a result of efforts put by the farmers. The govt also aims to double farmers’ income by 2020.

ii.Sampada scheme: The food processing sector has been opened to 100% FDI (Foreign Direct Investment), helping in development through PM Kisan Sampada Yojana(Scheme for Agro-Marine Processing and Development of Agro-Processing Clusters) with an allocation of Rs 6000 crores from 2016-20.