On January 27, 2020 the Indian environmentalist and Goodwill Ambassador of the United Nations Environment Programme (UNEP) Pavan Sukhdev won Tyler Prize 2020 for Environmental Achievement for his groundbreaking “green economy” work along with conservation biologist Gretchen C. Daily from United States (US). 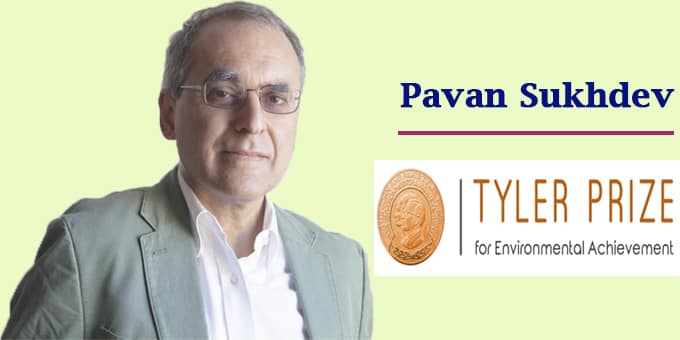 i.The winners will be awarded at the private ceremony on May 1, 2020, in presence of the Tyler Prize Executive Committee and distinguished members of the international environmental community at the Intercontinental Barclay Hotel in New York City, United States (US).

ii.On April 30, 2020 Pavan Sukhdev and Gretchen C. Daily will deliver public presentation of their work at the New York Academy of Science in New York, US.

i.He currently serves the World Wildlife Fund (WWF) as its President and Chairman of the Board as well as a Board Member for TEEB (The Economics of Ecosystems and Biodiversity) Advisory Board, Stockholm Resilience Centre, and the Cambridge Conservation Initiative.

i.She is a professor in Environmental Science in the Department of Biology at Stanford University, US and won the Tyler Prize 2020 for illuminating and quantifying the economic value of the natural environment.

ii.She is the seventh woman to receive the Tyler prize since 1973.

About Tyler Prize:
The Tyler Prize is one of the first international premier environmental awards established in 1973 by the late John and Alice Tyler. Tyler Prize is administered by the University of Southern California. It is regarded as the “Nobel Prize for Environment” which recognizes individuals who have contributed an outstanding manner to scientific knowledge and public leadership to preserve and enhance the environment of the world.