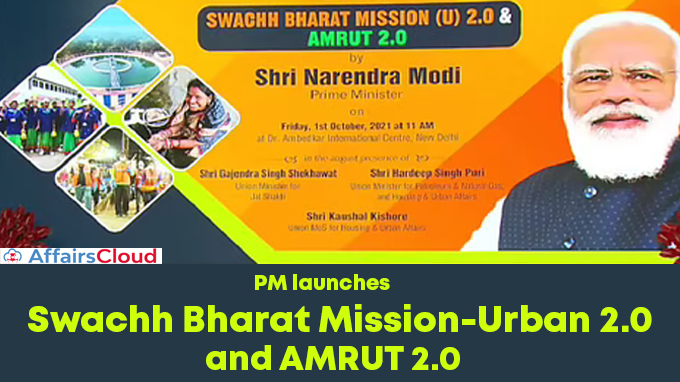 i.The SBM-U 2.0 aims to make cities completely ‘free of garbage’ and ensure grey and black water management in all cities other than those covered under AMRUT.

iv.In 2014 India has taken the pledge to make India open defecation free (ODF) and fulfilled it with the construction of 10.7 crore toilets and in urban areas, 62.6 lakh individual household toilets and 6.15 lakh community and public toilets have been constructed.

Background:The SBM was launched on October 2, 2014. The SBM-U under SBM has the focus on 100 percent wastewater treatment and reuse.

i.Improving sewage and septic management, making the cities into water safe cities and ensuring that no sewage drains anywhere in rivers.

iii.It will benefit more than 10.5 crore people in urban areas and the outlay of AMRUT 2.0 is around Rs 2.87 lakh crore.

Background: The Government of India has launched AMRUT in 2015 with the objective of transforming 500 cities and towns into efficient urban living spaces, with a special focus on a healthy and green environment for children.

i.Currently, all urban local bodies have been declared ODF and 70 percent of solid waste is being scientifically processed.

ii.The PM dedicated the successes of transformation in urban regeneration and cleanliness to Mahatma Gandhi.

iii.Along with Sabka Saath, Sabka Vikas the PM mentioned Sabka Vishwas, Sabka Prayas as critical for the campaign of cleanliness.

vi.SBM-U 2.0 and AMRUT 2.0 will help contribute towards the achievement of the Sustainable Development Goals 2030.

Participants: Union Ministers and Minister of States such as Hardeep Singh Puri, Gajendra Singh Shekhawat, Prahlad Singh Patel, Kaushal Kishore, Bishweswar Tudu, among others have participated in the launch.

On June 25, 2021, an online event was organized by the Ministry of Housing and Urban Affairs (MoHUA) to mark the 6th anniversary of the launch of three transformative Urban Missions viz. Smart Cities Mission (SCM), AMRUT and Pradhan Mantri Awas Yojana-Urban (PMAY-U). The event will be presided over by the Minister of State (Independent Charge), Hardeep Singh Puri, MoHUA.