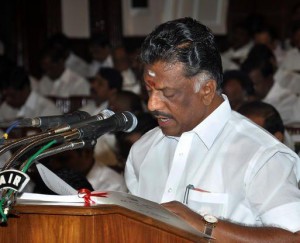 AIADMK leader O Panneerselvam was sworn in as Tamil Nadu Chief Minister at the Raj Bhavan. Governor K Rosaiah administered the oath to Panneerselvam, after which his cabinet colleagues were sworn in.

Panneerselvam, who was in charge of finance and Public Works Department (PWD) ministries in the Jayalalithaa cabinet, has retained them, in addition to assuming charge of home, public and other departments, which were held by the former chief minister.