On January 20, 2020 rights group Oxfam International released a report titled ‘Time to Care: Unpaid and underpaid care work and the global inequality crisis’. As per the report, India’s richest 1% of the population has more than 4 times of wealth held by 953 million people making up for the bottom 70% of the country’s population. 2,153 of total billionaires globally in 2019 had more wealth than the 4.6 billion people who make up 60% of the planet’s population. The report in detail are as follows: 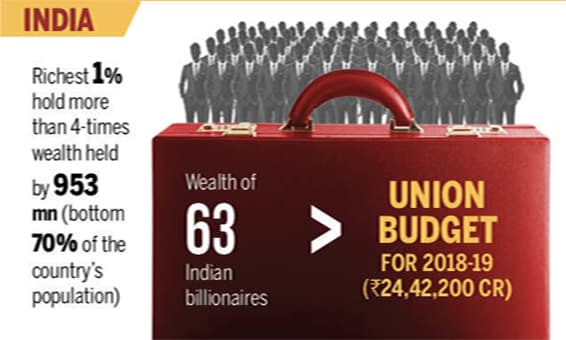 ii.Unpaid care work of Indian females:  Women and girls put in 3.26 billion hours of unpaid care work every day which marks a contribution to the Indian economy of at least Rs 19 lakh crore a year.  It is also 20 times the entire education budget of India in 2019 (Rs 93,000 crore).

ii.Global earnings: The no. of billionaires has doubled in over a decade despite decline in their combined wealth. Worldwide men own 50% more wealth than all the women.

iv.Tech CEO earning: A tech CEO with earnings pegged at Rs 106 per second, would make earnings in a year compared to a domestic worker.

vi.Tax payments:  Only 4% of global tax comes from taxation of wealth. The super-rich people avoid as much as 30% of their tax liability as per the study.

vii.Pressure on global economy: Recently the WEF’s annual Global Risks Report has warned that downward pressure on the global economy and financial inequality will intensify in 2019.

Inequality factors:
i.Climate change: Climate breakdown which is now gaining momentum has been estimated that by 2025, up to 2.4 billion people will be living in areas without enough water, which also indirectly indicates that women and girls will be forced to walk further to find water resources.

i.Inequality will be reduced if the richest 1% pay 0.5% etc wealth tax in the next 10 years. This would generate 117 million jobs in elderly, childcare, education and health sectors.

iii.4R framework: Feminist economists, civil society and care advocates have proposed a 4R framework for radical reprioritization in economies and societies. The 4Rs are recognize, reduce, redistribute and represent