The President of United States of America (USA), Donald John Trump, paid a State Visit to India on 24-25 February 2020, at the invitation of Prime Minister Shri Narendra Modi. He arrived at Sardar Vallabhbhai Patel international airport in Ahmedabad, Gujarat for India visit to strengthen the Indo-US friendship and trade deal. He was accompanied by his wife Melania, and 12-member delegation including his daughter Ivanka and son-in-law Jared Kushner. He was received by Prime Minister Narendra Modi. It was 7th American president and first visit by Donald Trump to India. 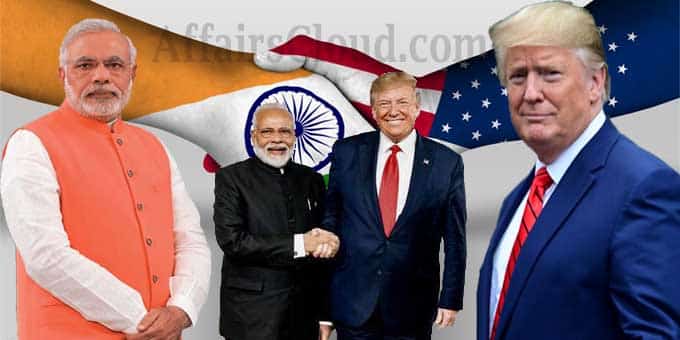 —ISRO-NASA joint space mission for 2022 launch; blueprint discussed in Modi-Trump talks
There would be collaboration between Indian Space Research Organization (ISRO) and National Aeronautics and Space Administration (NASA) for a joint space mission slotted for 2022. The mission would be in relation with world’s first dual-frequency Synthetic Aperture Radar satellite. There would also be an advance cooperation in Earth observation, Mars and planetary exploration, heliophysics, human spaceflight and commercial space cooperation.

–India, US sign three pacts in health and oil sectors
Both nations inked a bilateral Memorandum of Understanding (MoU) that seeks to promote access to high quality, safe, effective, and affordable medications for Indian and U.S. consumers.

–India, US agree to create a counter-narcotics working group to fight drugs trafficking

“Namaste, Trump” event
Namaste, Trump event was organized for Donald Trump at Ahmedabad’s newly-built Sardar Vallabhbhai Patel Cricket Stadium in Motera. It is the world’s biggest cricket stadium. The 125,000-strong crowd gathered to welcome to US president on his first visit to India. The event was on the lines “Howdy, Modi!” event organised for PM Modi during last year’s US visit.

Donald Trump, Narendra Modi embarked on 22-km-long ‘India Road Show’ in Ahmedabad
US President Donald Trump and Prime Minister Narendra Modi embarked on a 22-km-long roadshow from the Ahmedabad International Airport.  Artists and performers from many states were allotted a stage on the entire route to perform in their traditional attire. It has been named as ‘India Road Show’ by the Ahmedabad Municipal Corporation.

Donald Trump and his family in Agra to visit Taj Mahal
Mr. Trump and First Lady Melania Trump was received at the Kheria airbase by Uttar Pradesh Governor Anandiben Patel and Chief Minister Yogi Adityanath. They visited the iconic Taj Mahal in Agra, the 7th century Mughal-era mausoleum built as a monument of love. It was built by Mughal Emperor Shah Jahan in memory of his wife Mumtaz Mahal who died in 1631.

After their two-day trip in India, Donald Trump departed for the US following their banquet dinner at the Rashtrapati Bhavan. A dinner banquet was hosted by the President Ram Nath Kovind in the honour of the US President.

-President Trump’s convoy passed through the Sardarnagar area of Ahmedabad, which contains several slums. A four-foot tall, 500-metre-long wall has been built along this section, which residents say is meant to “hide the poor people”.