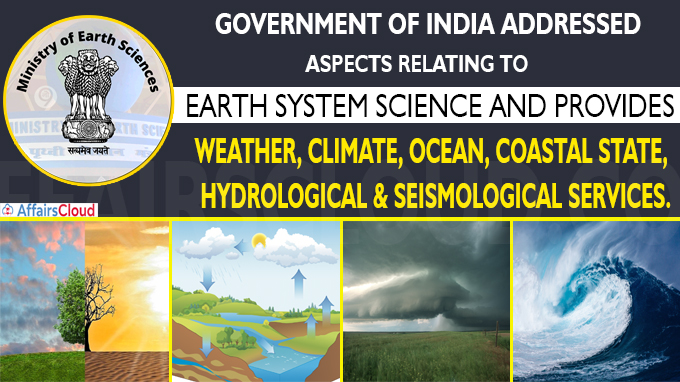 One major milestone achieved by MoES in 2020 was the release of Flash Flood Guidance Services (FFGS), which is the 1st of its kind for South Asian countries namely India, Bangladesh, Bhutan, Nepal and Sri Lanka.

Some of its significant achievements

Atmospheric and Climate Research-Modelling Observing Systems and Services (ACROSS):

iv.Publication of India’s first climate change report for the Indian region by MoES.

vii.Accurate and timely prediction of the tropical cyclones Amphan, Nisarga and Nivar by the India Meteorological Department (IMD).

iii.Achieved Certificate of Recognition for ‘Tsunami ready’ villages by Intergovernmental Oceanographic Commission (IOC)-UNESCO to 2 villages in Odisha –  Venkatraipur & Noliasahi. This is the 1st of its kind in the Indian Ocean Region.

ii.Conducted an expedition to Chandra Basin in Himalayas during September-October 2020 to activities like stake networking, snow pits measurements for snow and ice accumulation and ablation.

iii.Organized the 3rd meeting of the BRICS working group on Ocean and Polar Science on September 23, 2020.

i.Location of 1, 527 earthquakes in and around India from January-November, 2020.

iii.Participation in the Integrated Ocean Drilling Program (IODP)-378 expedition in the Southern Pacific Ocean to investigate the record of Cenozoic climate & oceanography.

iv.Establishment of Isotope Geochemistry Facility (IGF) at the National Centre for Earth System Science (NCESS), Kerala. It will help in understanding Precambrian Terranes’ deep-time evolution like the Southern Granulite Terrain in South India.

ii.Launch of Knowledge Resources Centre Network (KRCNet) by MoES on July 27, 2020 to integrate all knowledge and intellectual resources of MoES on a single, dynamic, web portal. It is a one-of-its-kind Digital system launched under Digital India Initiative.

MoES has also signed several MoUs at the International Level.

iii.November 23, 2020, Signing of MoU with the National Centre of Meteorology, Ministry of Presidential Affairs, United Arab Emirates (UAE) for scientific and Technical cooperation.

ii.On May 7, 2020, In the midst of COVID-19, the Regional Meteorological Centre of the IMD, included the areas of Gilgit-Baltistan and Muzaffarabad, which are parts of PoK in its weather forecasting for the 1st time.

About Ministry of Earth Science: