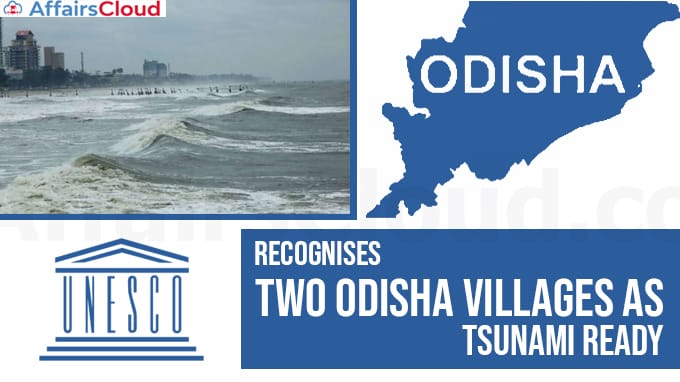 United Nations Educational, Scientific and Cultural Organisation (UNESCO) recognises Venkatraipur and Noliasahi, villages of Odisha as ‘Tsunami Ready’ for their overall preparedness to face the tsunami.With this recognition, Odisha became the first state in the India and India became the 1st Country in the Indian Ocean region to achieve the honour from the Intergovernmental Oceanographic Commission (IOC) of UNESCO.

On 7th August 2020, Over a virtual event in the presence of International and national delegates the certification of recognition was presented to the communities of Venkatraipur and Noliasahi and P K Jena, Managing Director of Odisha State Disaster Management Authority (OSDMA), also received the certification from UNESCO.

ii.Odisha aims to make the 326 coastal villages and urban local bodies as “Tsunami Ready” over a year of time.

Indian Ocean Tsunami Ready Programme of IOC- UNESCO is a programme based on the community performance to facilitate tsunami preparedness with the collaboration of the Community, leaders, national and local emergency management agencies.