President of India, Mr Ram Nath Kovind made a 7-day visit to the Philippines and Japan from October 17-23, 2019. 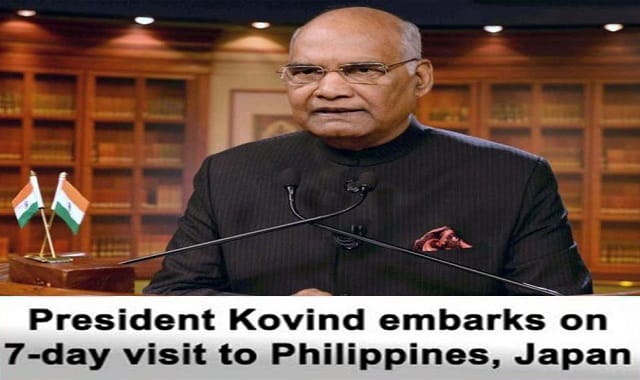 i. He visited the Philippines at the invitation of Mr. Rodrigo Roa Duterte, President of the Philippines and Japan to attend the Enthronement Ceremony of the Emperor of Japan, His Majesty Naruhito.
ii. It was his first State Visit to the Philippines and both nations celebrate 70 years of the Philippines-India diplomatic relations.
Visit to the Philippines (October 17- 21, 2019)
President of India Mr. Ram Nath Kovind reached Manila, the Philippines in the first leg of his visit to two nations – the Philippines and Japan. He has presented the ‘Key to the City’ by the Mayor of Manila City, Mr. Domagoso at the Rizal Park.
i. He visited the Malacanan Palace. He was received by President Rodrigo Roa Duterte of the Philippines and was accorded a ceremonial welcome.
India-Philippines Business Conclave and the 4th ASEAN-India Business Summit for 2019 in Manila
Mr Kovind addressed the India-Philippines Business Conclave and the 4th ASEAN (Association of Southeast Asian Nations) -India Business Summit for 2019 in Manila, Philippines.
i.He mentioned that India’s “Make in India” and next-generation infrastructure programs and the Philippines’ “Build, Build, Build” infrastructure initiative provides various opportunities.
Agreements
4 agreements in the field of the maritime domain, security, tourism, science and technology, and culture were signed between both countries.
Unveiling of the bust of Mahatma Gandhi
President Kovind unveiled the bust of Mahatma Gandhi at Centre for Peace Education in Miriam College, Quezon City marking the 150th birth anniversary of Gandhi in the presence of the Mayor of the City and other dignitaries.
Gift of Goddess Tara Statue to Philippine Counterpart Duterte
President gifted the statue of goddess Tara to his Philippine counterpart Rodrigo Duterte, highlighting the ancient cultural connections between the two countries. In Hinduism and Buddhism, the goddess Tara is regarded as a form of ‘shakti’ (power).
Other highlights
i.Bilateral talks: Kovind held wide-ranging talks with his counterpart Duterte at his official residence, the Malacanan Palace. Both countries committed to work closely to defeat and eliminate terrorism in all its forms and manifestations.
ii. He paid tributes to Dr Jose Rizal, the national hero of the Philippines at the Rizal Park.
iii. He interacted with the parents of babies who underwent liver transplant in India under the Philippine – India Pediatric Liver Transplant Program.
iv. He visited the University of the Philippines Manila Museum to attend an event organised by Mahaveer Philippines Foundation.
v.He attended the Indian Community Reception hosted by Shri Jaideep Mazumdar, Ambassador of India to the Philippines in Manila. He invited them to avail the opportunities that India offers – for Innovation, Investment, Research and Education.
Visit to Japan (October 21- 23, 2019)
President reached Tokyo, Japan in the final leg of his visit to two nations – the Philippines and Japan. He attended the enthronement ceremony of the Emperor Naruhito of Japan in the Imperial Palace. President Ram Nath Kovind was the first Presidential visit from India to Japan in the past 19 years.
President lays foundation stone for Sri Sathya Sai Sanathana Samskruti Project in Japan
i. President laid the foundation stone for Sri Sathya Sai Sanathana Samskruti Project at Sai no Sato, Kakegawa, Japan.
ii.Sai no Sato will be developed as a temple on the lines of Akshardham and Swaminarayan Temple to promote Indian traditional culture.
Other highlights
i.On the sideline of the enthronement ceremony, the President Kovind met President Bidya Devi Bhandari of Nepal and held talks with her.
ii.He attended a banquet hosted in his honour by Prime Minister Shinzo Abe of Japan.
iii. He addressed the members of Indian diaspora in Tokyo at a reception hosted by Shri Sanjay Kumar Verma, Ambassador of India to Japan. He invited the diaspora in Japan to be part of India’s growth story
iv.He visited the Tsukiji Hongwanji Buddhist Temple and planted a sapling from Bodh Gaya.
v.He also visited the Shinto Meiji Shrine and interacted with a delegation from the Gotemba Pagoda.
About The Philippines:
♦ Capital: Manila
♦ Currency:  Philippine peso
About Japan:
♦ Capital: Tokyo
♦ Currency: Japanese Yen