The Cabinet Committee on Economic Affairs (CCEA) Chaired by the Prime Minister (PM) Shri Narendra Modi has approved the following proposals on February 26, 2020.The approval in detail are as follows: 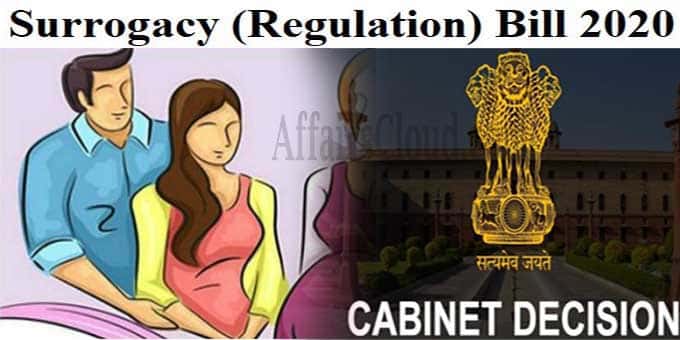 i.The draft of the new bill has included all the recommendations of the Select 23-member Committee of the Rajya Sabha headed by BJP( Bharatiya Janata Party) MP(Member of Parliament) Bhupender Yadav, which had studied the old drafts of the Surrogacy (Regulation) Bill, 2019 and suggested 15 major changes in the bill.

Special in the new bill:

i.The approval is an effort to ensure administrative effectiveness and smooth transition in J&K.

iii.Under Section 96 of the J&K Reorganization Act 2019, the Central Government has the right to amend the laws as necessary, adopting any law before the completion of a period of one year from the date fixed in the context of the UTs.

Cabinet approves the exemption of IPGL from the DPE Guidelines
The Union Cabinet gave its nod for the exemption of the India Ports Global Ltd (IPGL) from the Department of Public Enterprises (DPE) guidelines. This will help in the smooth execution of the Chabahar project in Iran. However, this does not include exemptions from reservation and vigilance policy and will continue to apply as before.

i.In order to develope & manage the Shahid Behesthi Port of Chabahar in Iran,the  IPGL was formed as a special purpose vehicle(SPV) jointly promoted by Jawaharlal Nehru Port Trust (JNPT) and Deendayal Port Trust (DPT) under the control of the Ministry of Shipping .

ii.After the withdrawal of the US from the Joint Comprehensive Plan of Action (JCPOA) or Iran deal 2015, the Ministry of External Affairs advised the Ministry of Shipping to remove the JNPT and DPT on 29 October 2018 to avoid the impact of the US sanctions. On the basis of this suggestion and with the approval of the high-level steering committee, all the shares of JNPT & DPT were transferred on December 17, 2018 to Sagarmala Development Company Ltd. (SDCL).

iii.Chabahar port is the India’s 1st port project which is strategically important. In such a situation, the IPGL board of directors should continue to work as a management company. Also, following the directions of the foreign ministries along with the ship transportation, the guidelines of the DPE should not apply to it for 5 years. Accordingly, the Ministry of Shipping had requested IPGL to be exempted from the DPE guidelines so that the project could be implemented smoothly.

Cabinet approves National technical textiles mission costing Rs 1,480 crore
The Union Cabinet has approved the National Technical Textiles Mission. It will cost Rs 1,480 crore. The objective of this mission is to lead India in the manufacture of technical fabrics used in specific fields like medical, military.

i.Finance Minister Nirmala Sitharaman proposed the formation of the National Technical Textiles Mission in the budget presented on February 1,2020. It is to be executed during 2020-21 to 2023-24.

iii.Technical textiles use such materials and products so that they can be used in the relevant field according to the need. This type of clothing is used in agriculture, medicine, sports, military and many other fields.

Cabinet approves a bill to confer National importance status for 2 food institutes in Haryana & Tamil Nadu
The Union Cabinet has approved a bill to give the status of Institute of National Importance (INI) to 2 National Institutes of Food Technology at Kundli, Haryana and Thanjavur,Tamil Nadu(TN).

ii.This step will help these institutions to cooperate with foreign food institutes and improve the standard of education.