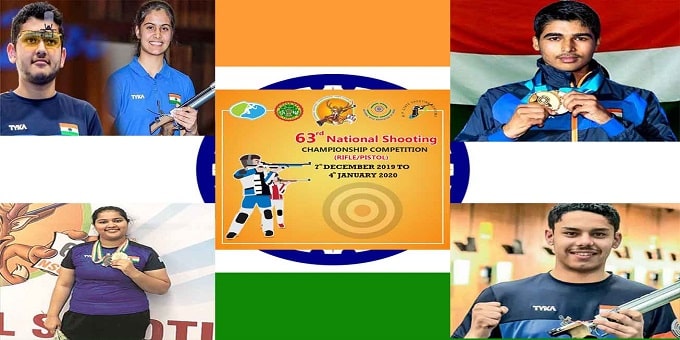 Manu Bhaker, Anish Bhanwala bags gold medals
Indian professional sport shooter, Manu Bhaker of Haryana has bagged 4 gold medals (individual and team events in senior and junior) in the women’s 10 meter air pistol event. Manu topped the junior category with 243 points and won the title with 241.5 points in the final of the senior category. In the women’s pistol rankings, she scored 588 points in the joint qualification of the two events.
Shooter Anish Bhanwala from Haryana has clinched gold medal in the senior men’s 25 meter rapid fire pistol event.He captured 28 points in the senior class finals .He topped the qualification with a score of 582.

Saurabh Chaudhary clinches gold in men’s 10 m air pistol
Top shooter, Saurabh Chaudhary from Meerut (Uttar Pradesh) has won the gold medal in the men’s 10 meter air pistol event. He topped the table with 246.4. He is one of the medal contenders for the 2020 Tokyo Olympics, having just scored less than 0.1 point from his former world record score.
Sarabjot Singh finished second with a score of 243.9 in the second position while world number two Abhishek Verma won the bronze medal.

Vijayveer Sidhu:
1st gold- 25M Standard Pistol for Men: Vijayveer of Chandigarh has won the individual gold medal in the men’s 25m standard pistol event. He topped the table with 580 points while Gurpreet Singh (578) and Udhayveer Sidhu (574) were behind them.
2nd gold- Junior Men:Vijayveer (580) was also ahead of Udhayveer (574) and Harsh Gupta (572) in the junior category.
3rd gold- Junior Men’s Team :Vijayveer along with Udhayveer and Unish Holinder (1699) also won the team gold medal in the junior category.