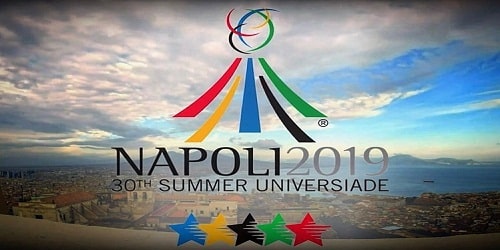 Venue:
The tournament was held in Naples, Italy.The opening and closing ceremony was held at the third largest stadium in Italy, Stadio San Paolo.
Winners:

Highlights:
i. Japan won the top spot with 82 Medals (33 Gold, 21 Silver, 28 Bronze).
ii. India got 29th place in the list with the total medal tally of 4 (1Gold, 1Silver, 2 Bronze).
ii. Dutee Chand, hailing from Jajpur district of Odisha, became the first Indian to win a gold medal at the event.
She is the current national champion in the women’s 100 metres event. She is the third Indian woman to ever qualify for the Women’s 100 meters event at Summer Olympic Games (for 2016 Rio Olympics).
iii. The Indian shooter Elavenil (Cuddalore, Tamilnadu) got 225.2 points in the final round to finish second behind Brazdova Lucie( Czech Republic) with 250.3 points.
iv. The women’s team comprising Nina Chandel, Elavenil Valarivan and Aayushi Gupta got their Bronze medal with 1866.2 points.
v. Angad Vir Singh Bajwa (24) shot 44 in the final & got Bronze medal. He had made it to the finals with the third-best of 122/125 score. The gold was won by Nicolas Vasiliou of Cyprus with 56 hits. Angad represented India in his first senior world cup in Acapulco 2015.

About Universiade
It is an international multi-sport event, organized for university athletes by International University Sports Federation (FISU). Its name is linguistic non-sense created in some European non-English languages, an apparent combination of the words “University” and “Olympiad”. It is the largest multi-sport event in the world apart from the Olympic Games. It was inaugurated in 1959 (summer games ) and 1960 (winter games).