On July 15, 2019, The report named State of Food Security and Nutrition in the World 2019 produced by the United Nations (UN) Food and Agriculture Organisation (FAO), International Fund for Agricultural Development (IFAD), UN Children’s Fund (UNICEF), the World Food Programme (WFP) and the World Health Organisation (WHO) was released. It stated that in the year 2018, more than 820 million people suffered hunger, food insecurity and malnutrition worldwide. It is for the third year in a row the number has risen. 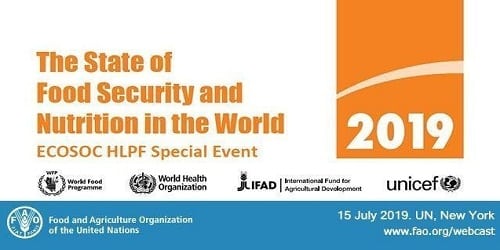 Key Points:
At present, globally 1 in every 9 people suffer from hunger.

About UNICEF:
♦ It was originally known as the United Nations International Children’s Emergency Fund.
♦ Headquarters: New York, US
♦ Founded: 11 December 1946