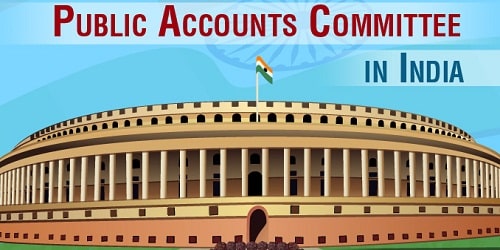 Key points:
i. The remaining 7 members of the panel will be elected from among the Rajya Sabha members.
ii. The other members elected to the committee from Lok Sabha are T R Baalu (DMK), Subhash Chandra Baheria, Sudheer Gupta, Darshana Vikram Jardosh, Ajay (Teni) Misra, Jagadambika Pal, Vishnu Dayal Ram, Ram Kripal Yadav (all BJP), Bhartruhari Mahtab (BJD), Rahul Ramesh Shewale (Shiv Sena), Rajiv Ranjan Singh (JD-U) and Balashowry Vallabbhaneni (YSRC Party).
iii. About PAC: It consists of not more than twenty-two members, fifteen elected by Lok Sabha, the lower house of the Parliament, and not more than seven members of Rajya Sabha, the upper house of the Parliament headed by a member from the opposition since 1967. The functions of the committee include,  include an examination of accounts showing the appropriation of sums granted by Parliament for the expenditure of the government, the annual financial accounts of the government.
iv. In addition,29 members of Parliament’s estimates committee were also elected unanimously.
v. Two more parliamentary panels on Welfare of Scheduled Castes (SC) and Scheduled Tribes(ST) and on Public Undertakings were also constituted.