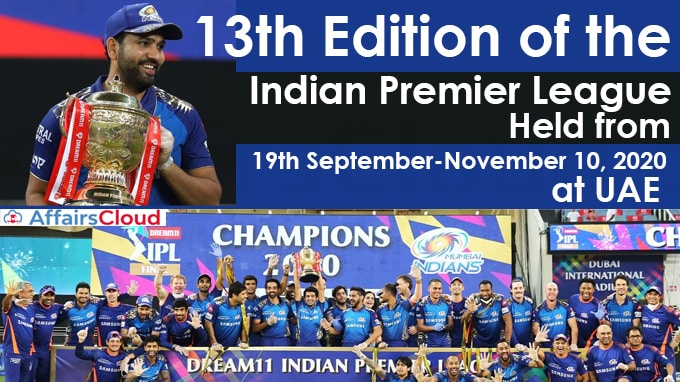 Mumbai Indians won the 13th Edition of the Indian Premier League (IPL) officially known as Dream11 Indian Premier League 2020 that took place from 19th September-November 10, 2020 at the United Arab Emirates (UAE). A total of 8 teams participated in the event. Delhi Capitals became the runner up in the 13th edition of IPL. Jofra Archer of Rajasthan Royals won the Player of the Series.

ii.Trent Boult (New Zealand) of Mumbai Indians was adjudged as the Player of the Match for his spell of 3/30 in Four Overs.

i.Following his 69-ball 132 (Not Out) against Royal Challengers Bangalore, KL Rahul holds the record for Highest score for an Indian in an IPL innings.

iii.Virat Kohli (India) of Royal Challengers Bangalore (RCB) with 4314 Runs leapfrogged MS Dhoni (India) of CSK to become the highest run-scorer by a captain in the history of IPL.

vi.Dinesh Karthik (India) playing for KKR with 110 Catches overtook MS Dhoni (109 Catches) as the wicket-keeper with most catches in the IPL.

viii.Chris Gayle became the first batsman to get to 1,000 sixes in T20 cricket history.

About the Indian Premier League 2020:

It lasted for 53-days and a total of 60 matches. The Cricket Format of the IPL League is Twenty20 format. The tournament was administered by the Board of Control for Cricket in India (BCCI). The venue of the IPL was shifted from India to UAE due to Pandemic.Due to the Pandemic, the entire tournament was played in a Bio-secure environment.

i.This is the Second time that a complete IPL Tournament is being played outside India. The previous time an entire IPL season was conducted outside of India was the 2nd Edition of IPL (Winners – now defunct Deccan Chargers) which was held in South Africa in 2009.

ii.In 2014, the 7th Edition of the IPL (Winners – Kolkata Knight Riders), the first Twenty Matches were conducted in UAE due to General Elections.

The IPL matches were played at 3 venues in United Arab Emirates (UAE):

i.Front foot no-balls were adjudicated by the Third Umpires.

ii.If a Super Over is a tie, subsequent Super Overs will be played until there is a winner.

For the First time in IPL history, mid-season transfer windows were introduced. Using the mid-season transfer teams can transfer players between them. For a player to be transferred, the player should have played a maximum of 2 matches, and the player can be capped or uncapped and both Indian and International players were eligible for transfer.

Trailblazers won the Third Season of the Women’s T20 Challenge 2020 officially known as Jio Women’s T20 Challenge took place simultaneously in UAE from November 4-9,2020. The Group matches took place at Dubai & Abu Dhabi whereas the Final took place at the Sharjah Cricket Stadium in UAE. It was a three-team tournament which consisted of 3 Group Matches and followed by a Final. The tournament was established by the BCCI in 2018.

ii.Smriti Mandhana of Trailblazers was adjudged Player of the Match for her knock of 68 in the Finals.

i.Radha Yadav (India) of Supernovas Became the first bowler in the history of Women’s T20 Challenge to pick up a 5-wicket haul when she took 5 wickets in the Finals against Trailblazers.

ii.IPL Supernovas had won the previous two Challenge Titles. They won the 2018 season title at Wankhede, Mumbai (Maharashtra) and 2019 Title at the Sawai Mansingh Stadium in Jaipur, Rajasthan.

iii.Radha Yadav was named as Player of the Series for taking 8 wickets in the Tournament.

iv.Natthakan Chantham became the First Thai Cricketer to be represented in the Tournament.

v.Chamari Atapattu (Sri Lanka) of Supernovas was the highest run scorer of the Season. She scored 117 runs.