Only 3% target of pulses and seeds achieved under the Pradhan Mantri Annadata Aay Sanrakshan Abhiyan (PM-AASHA) scheme according to the data released by the Agriculture Ministry in the Lok Sabha on 3rd December 2019. The production of pulses has been only 1.08 lakh tons so far but the target of the PM-AASHA scheme is to produce 37.59 lakh metric tons of crops. The crops started arriving from October and will last till February. 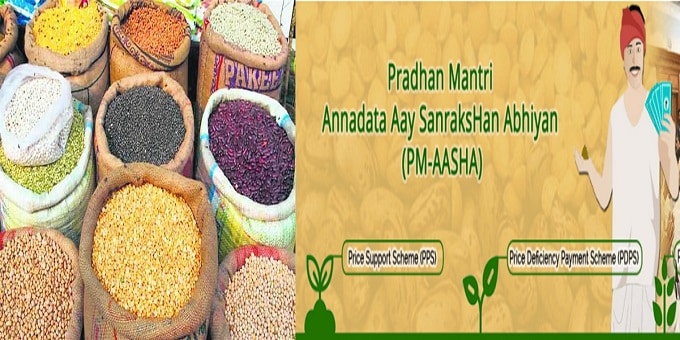 i.The aim of the PM-AASHA scheme is to safeguard the income of farmers by increasing the MSP (Minimum Support Price) of the Kharif crops with the principle of 1.5 times the cost of production. The scheme includes three main sections the Price Support Scheme (PSS), the Price Deficiency Payment Scheme (PDPS) and the Pilot of Private Procurement and Stocklist Scheme (PPPS).

ii.For oil seeds the scheme will be implemented under Private Procurement Stocklist Scheme (PPSS) in the Agricultural Produce Market Committee (APMC) of the pilot districts. The scheme also involves the participation of private sectors and the selected APMC(s) will cover one or more type of oilseeds for which the MSP has been notified. Since the notified commodity involves physical procurement the PSS and PDPS will also be involved as substitutes.

iii. PSS scheme requires physical procurement of pulses, oilseeds and copra which will be done by the Central Nodal Agencies with the involvement of the State Governments. And also National Agricultural Cooperative Marketing Federation of India (NAFED) and Food Corporation of India (FCI) will take up the operations in the States and Districts.

iv.Under PDPS, all oil seeds to which the MSP has been notified will be covered and the scheme involves direct payment of the difference between the MSP and the selling price, the payment will be made to pre-registered farmers to their registered bank accounts. This scheme does not involve any physical procurement of crops. The support of the central government will be given as per norms.

v.The budget of the PM-AASHA scheme for two years is Rs.15,053 crore and an additional government credit guarantee of Rs.16,550 crore is given to the agencies taking up the procurement.