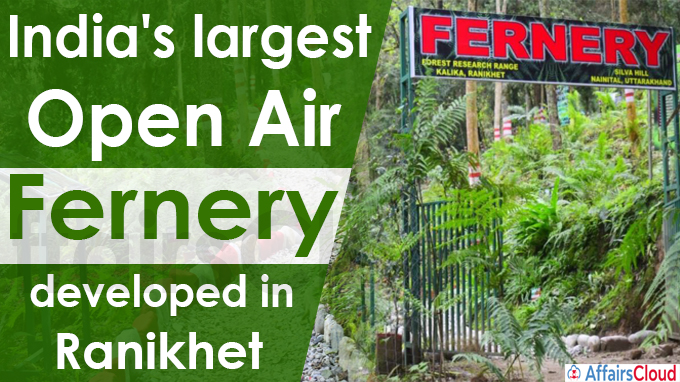 India’s largest Open-air Fernery, consisting 120 different varieties of ferns, was inaugurated by the famous expert on Pteridophyte (Ferns), Dr Nilambar Kunetha in Ranikhet, Uttrakhand.However, it is the country’s first open-air fernery in natural surroundings which is not under any poly-house/ shade house.

To conserve and protect various ferns and species and to spread awareness about its ecological values.

About the Ranikhet Fernery-

ii.The fernery is spread around an area of 4 acres at an altitude 1800m.

iii.It consists of a mixture of species from western and eastern Himalayan region.

Some  rare species such as  Tree Fern (Cyathea spinulosa), which has been declared as threatened by the State Biodiversity Board of Uttarakhand. Only a few plants of this species have been left in the wild and it is considered to be one of the most ancient species of fern. It is believed that herbivore dinosaurs used to feed on its trunk as it is starch rich.

iv.It has around 30 species of high medicinal importance such as Hansraj(Adiantum venustum). The herb Hansraj has an important role in Ayurveda and Tibetan medicine. Therefore it has a high value to cure several diseases.

The Ministry of Environment and Forests (MoEF) was introduced in 2004 to accelerate activities for the preservation of natural forests, management of wildlife, infrastructure development in forests, and other allied works.