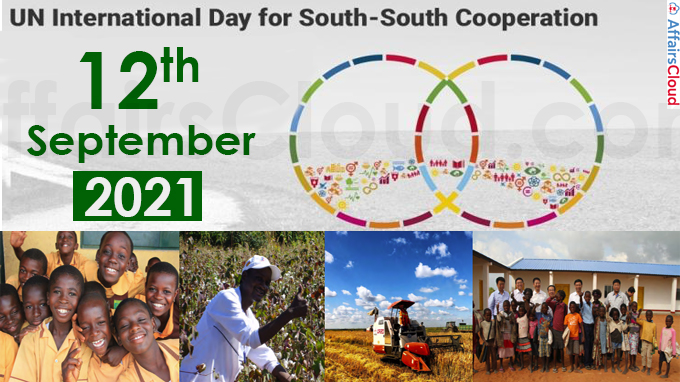 The United Nations (UN)’s International Day for South-South Cooperation is annually observed across the globe on September 12th to highlight the economic, social and political developments of the countries in the southern region. The day also highlights the efforts of the UN towards cooperation among the developing countries.

ii.December 19 marks the day on which UNGA endorsed the Buenos Aires Plan of Action for Promoting and Implementing Technical Cooperation among Developing Countries.

iii.In 2011, the UNGA moved the date of UN Day for South-South Cooperation from 19th December to 12th September.

iv.The date 12th September marks the day on which UNGA adopted the Buenos Aires Plan of Action for Promoting and Implementing Technical Cooperation among Developing Countries.

The United Nations Office for South-South Cooperation (UNOSSC) organised a high-level virtual panel discussion with a focus on boosting solidarity in support of a more inclusive, resilient and sustainable future.

i.South-South cooperation is a framework of collaboration among countries of the South in the political, economic, social, cultural, environmental and technical domains.

iii.Triangular cooperation is collaboration in which traditional donor countries and multilateral organizations facilitate South-South initiatives through the provision of funding, training, management and technological systems

UNOSSC was established to advocate for and coordinate South-South and triangular cooperation globally and within the UN system.

UNOSSC has been hosted by the United Nations Development Programme(UNDP) since 1974.

In 1974, UNGA adopted a resolution and endorsed the establishment of a special unit within UNDP.

In 2012, UNGA adopted a resolution and changed the name of the special unit to United Nations Office for South-South Cooperation (UNOSSC).