In order to mark World Cancer Day on February 4, 2020, WHO (World Health Organization) and its specialized International Agency for Research on Cancer (IARC) have released 2 reports namely, “Report on Cancer: Setting priorities, investing wisely and providing care for all” by WHO & “World Cancer Report “Cancer research for cancer prevention” by IARC aimed at setting the global agenda on the disease & focused on research and prevention. 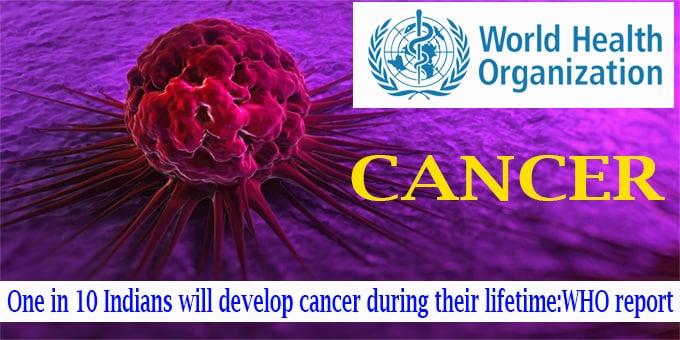 Highlights:
i.Prediction:
As per the report by the WHO, one in 10 Indians to have cancer in their lifetime and one in 15 died of the disease.
At the same time, WHO has predicted that cancer cases will jump by 81 % by 2040 in poor countries due to the lack of investment in prevention and care.
The rate of cancer incidence worldwide could rise to 60 % in the next 20 years. The highest number of cases can be increased in middle-income countries because 80 %people who smoke worldwide are from these countries.

ii.Reason: As per WHO, cancer is spreading more in women than men in recent years. Men are getting cancer due to tobacco consumption & increasing obesity is becoming the cause of cancer in women.

iv.Trending:According to the report, worldwide breast cancer cases are increasing at a rate of 1.4–2.8 % &these are more in urban areas than in the village. At the same time, cases of cervical cancer saw the decreasing trend in the incidence rates in most regions in India (annual percentage change of  -2.0% to -3.5%).

v.Reduction: high-income countries have adopted prevention, early diagnosis and screening programmes, which together with better treatment, have contributed to an estimated 20% reduction in the probability of premature mortality between 2000 and 2015, but low-income countries only saw a reduction of 5%.