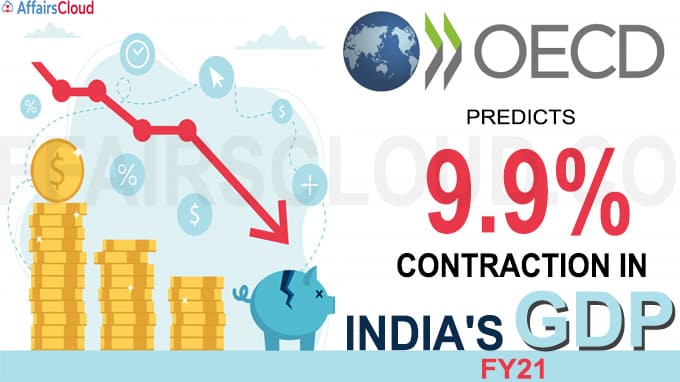 The Organization for Economic Co-operation and Development (OECD) in its December 2020 Economic Outlook titled “A Brighter Outlook But Recovery Will Be Gradual” has revised the India’s Gross Domestic Product (GDP) rate upwards to -9.9% from -10.2% projected in September for FY21.

–World economy will bounce back to pre-pandemic levels by the end of 2021 but recovery will be uneven in the countries.

–India’s Agriculture sector has revived from favourable weather conditions but manufacturing and services are still facing the effects of containment measures.

i.India has been designated as ‘Vice-Chair’ of Good Laboratory Practice (GLP) Working Group of the Organisation for Economic Cooperation and Development (OECD) to recognise the contributions of the Indian GLP Programme.

ii.In accordance with the study by OECD’s Global Forum on transparency and exchange of information for tax purposes, referring to the period from July 2015 to June 2018, India was named among the top-three countries as EOI (Exchange of Information) partners along with France and Germany.