India successfully test fired one of its nuclear-capable ballistic missiles from a naval ship off the coast of Odisha. The trial was conducted from an undisclosed location, nearly 45 km from Puri and Paradip coast, Balasore, Bhubaneswar. The test was carried out by the Strategic Forces Command (SFC) of the Navy. 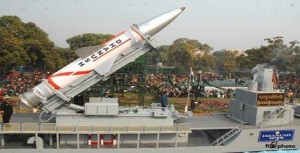 It is developed by the DRDO under its ambitious Integrated Guided Missile Development Programme (IGMDP). Missile was test-fired from INS Subhadra, while another warship provided all logistic support for the test.