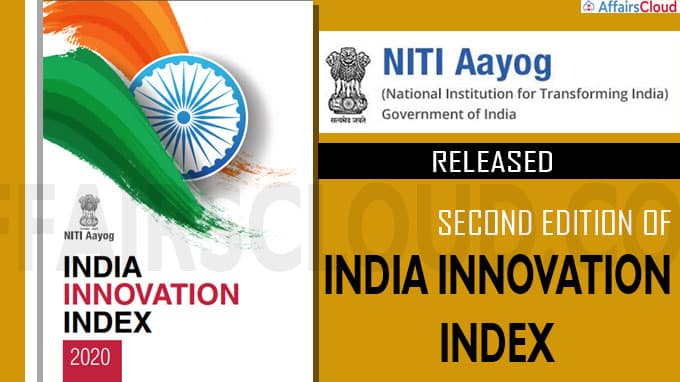 On January 20, 2021, NITI Aayog, along with the Institute for Competitiveness virtually released the 2nd Edition of Indian Innovation Index 2020. Karnataka topped the Index in the Major States Category, Delhi topped among the Union Territories (UT) and Himachal Pradesh among North-Eastern and Hilly States. Overall, Indian States have achieved an average score of 23.4 in the Index

iii.The Main objective of the index is to

iv.In order to make the Index effective, NITI Aayog has also added several new indicators & remodeled the Methodology, one of the indicators is Research & Development (R&D) expenditure by State.

iii.R&D Expenditure Indicator will help in understanding the regional differences in investment towards innovation.

iii.Overall, the score of 23.4 attained by States/UT in the Index highlights the room for improvement in innovation.

Innovation – India vs The World:

Key Points from the Report:

The National Policy on Faecal Sludge and Septage Management (FSSM) was launched by the Ministry of Urban Development in 2017.

Objective – To ensure that all Indian cities and towns become totally sanitized, health and liveable and ensure sustenance of good sanitation practices.

i.November 19, 2020, Bhubaneswar became the First City in the Country to get ISO 9001:2015 Certification for Faecal Sludge and Septage Management (FSSM) services.