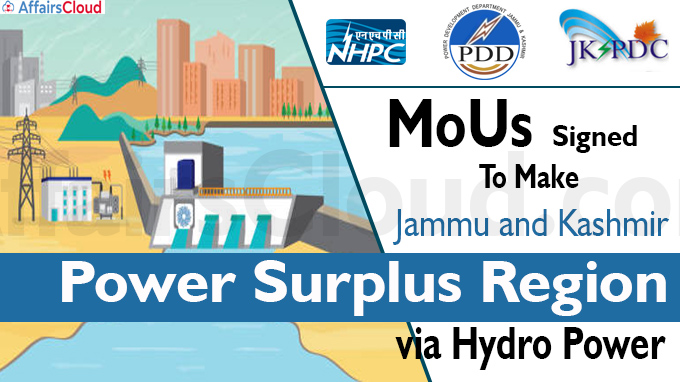 Purpose of the MoUs– To make J&K a power surplus region in India.

Target-To double the energy generation of J&K by 2024 and formulate a strategy for efficiency through policies, monitoring mechanisms to ensure energy security for economic and social benefits, by utilising  J&K’s hydro energy resources.

About 19 important Projects of PDD were Inaugurated

In addition to this, about 19 important projects of PDD were also inaugurated during the Mega inauguration ceremony. The project aims to have a great generation, efficient transmission and better distribution of power supply in J&K

According to the provision of these MoUs, after 40 years of commercial operations, the projects will be given to J&K.

i.With these projects, J&K will become a power surplus region from a power deficit region in the next 4 years.

ii.Of the 2 agreements, NHPC will work in association with the administration at the first and Sawalkot project will be given to NHPC to complete under second.

iii.This project has been postponed since its conception in 1984 and was expected to generate 1856 MW power

Benefits of these Projects

i.These projects will generate employment opportunities and also boost the per capita income of J&K.

ii.These will ensure that additional 3498 MW power is generated in the next three to four years.

During the mega inauguration ceremony some other projects were also inaugurated including:

Note- As per the national average, electricity in rural areas is 20 hrs and in urban areas is 22-23 hrs

Other MoU signed for Development of J&K

The UT administration has signed many MoUs for the development of J&K including an MoU with National Agricultural Cooperative Marketing Federation of India Ltd.(NAFED) in order to bring reforms in the horticulture sector, for high density plantations, cold storage cluster, market linkage and Geographical Indication(GI) tagging of local products that includes announcement of Rs 2200 cr investment in the UT by NAFED.

Click here to know more details about the MoU

i.According to the ‘2020 Hydropower Status Report and Covid-19 Policy Paper’ of the International Hydropower Association (IHA), India becomes the 5th largest hydropower capacity in the world with its total installed base now standing at over 50 Gigawatt.

ii.The top 5 nations include, Canada, US, Brazil and China.