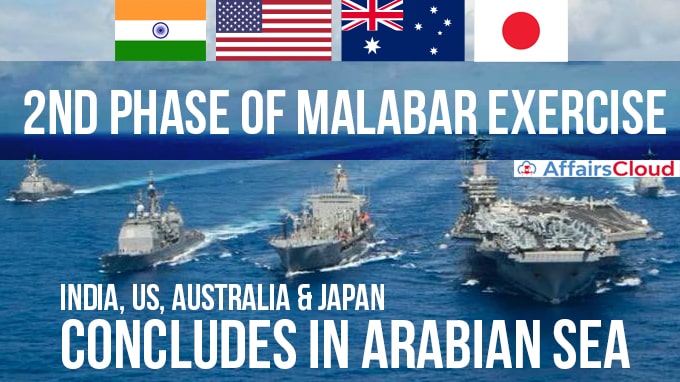 Phase 2 of the 24th Edition of the Four-nation Naval Exercise Malabar 2020 took place in the Arabian Sea from November 17-20, 2020. This is the First time since 2007, that all the QUAD (Quadrilateral Security Dialogue) Countries (India, United States, Japan, Australia) are participating in the Malabar Naval Exercise.

i.The Phase-1 of the Four-Nation exercise took place in the Bay of Bengal from November 3-6, 2020.

ii.Both Phase-1 & Phase-2 of the exercise was restricted to sea phase and were conducted in “Zero Contact” format due to Pandemic.

iii.Australia is taking part in the exercise for the first time after 2007.

iii.The exercise demonstrated the synergy, coordination and interoperability between the Navies of QUAD Countries.

Indian Participation in the Malabar Exercise:

Participation of Navy units from Other QUAD members:

i.The Malabar is Annual Exercise started in 1992 as a Bilateral drill between Indian Navy and US Navy in the Indian Ocean.

ii.Japan joined the exercise as a Permanent Member of the Exercise in 2015.

i.On October 3, 2020, the 2nd edition of Indian Navy (IN) – Bangladesh Navy (BN) Bilateral Exercise Bongosagar was held in Northern Bay of Bengal, followed by 3rd edition of IN – BN Coordinated Patrol (CORPAT) from 4 to 5 October 2020 at the same venue.