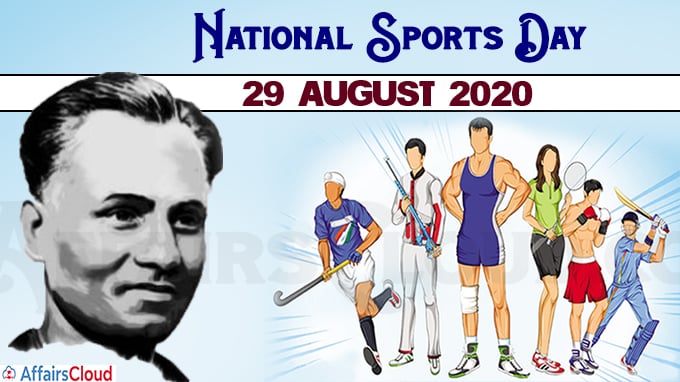 National Sports Day is annually observed on 29th August to commemorate the birth anniversary of Indian Hockey Legend Major Dhyan Chand Singh. The day is celebrated to create awareness among the general public on the importance of sports and to attract attention towards sports in India.

i.The Government of India decided to celebrate the 29th August of every year as the National Sports Day in 2012

i.The celebration of the National Sports Day is organised at the Rashtrapati Bhavan where the sports related awards like Rajiv Gandhi Khel Ratna, Arjuna Award and Dronacharya Award are distributed.

iii.60 out of 74 awardees attended the virtual ceremony conducted across the 11 Sports Authority of India(SAI) centres in different centres and received the honours from President Ram Nath Kovind.

Kiren Rijiju, Union Minister of Youth Affairs and Sports, Narendra Dhruv Batra, President of the Indian Olympic Association(IOA) and other dignitaries will attend the ceremony from Vigyan Bhavan, New Delhi.

On 29th August 2020, Kiren Rijiju announced a hike in 4 of the seven categories of the National Sports and Adventure Awards.

ii.Arjuna Award has been increased from Rs.5 lakh to Rs.15 Lakh.

iv.Dhyan Chand Awardees will be given 10 lakh rupees instead of 5 lakh rupees.

i.To celebrate the National Sports Day 2020, Physical Education Foundation of India (PEFI) and Fit India Movement organised a 10 day run – “PEFI-Fit India Movement Run” from 29th August 2020 to 7th September 2020 across India. The concept of the run is “It can be run anywhere, anytime.

ii.The runners who submit the run data through a GPS based device from 29th august -7th September 2020 will receive an e-certificate.

ii.He was internationally known as “Wizard of Hockey” and “The magician” for his outstanding skills with the stick.

iii.He was the Captain of Indian Hockey team during the 1936 summer Olympics at Berlin.

i.Representing India he made 400 international goals in 185 matches during his professional hockey career from 1926 to 1948.

ii.He was a part of the three-time Olympic gold medalist Indian Hockey Team with wins at the Summer Olympics of 1929 at Amsterdam, the first ever gold medal of Indian Hockey team at Olympic followed by 1932 games at Los Angeles and 1936 games at Berlin.

i.The Government of India Honoured him with Padma Bhusan, the third highest civilian award in 1956.

iii.The National Stadium of Delhi was renamed as Major Dhyan Chand Stadium in 2002.