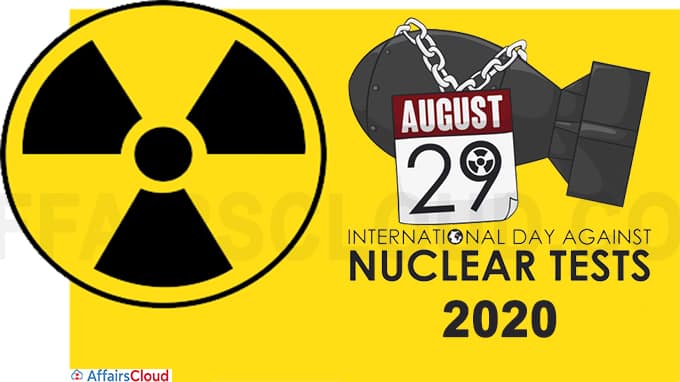 i.The United Nations General Assembly(UNGA), adopted the resolution A/RES/64/35 on 2nd December 2009 during its 64th session and declared 29th August of every year as the International Day Against Nuclear Tests.

ii.The Republic of Kazakhstan with a large number of sponsors and cosponsors initiated the resolution to declare 29th August as the International Day Against Nuclear Tests to commemorate the closure of Semipalatinsk Nuclear Test site on 29 August 1991.

On 26th August 2020, H.E. Tijjani Muhammad-Bande, President of the UNGA convened a High-level plenary meeting of the General Assembly to commemorate and promote the “International day against Nuclear Tests” over a virtual platform.

i.Comprehensive Nuclear-Test-Ban Treaty (CTBT), the main mechanism adopted by the UNGA on 10th September 1996 to eradicate nuclear explosions by everyone, everywhere: on the Earth’s surface, in the atmosphere, underwater and underground.

ii.Currently around 184 countries have signed the treaty and 168 have ratified it.

iii.The treaty can enter into force only after ratified by the states with significant nuclear capabilities.

The Provisional Technical Secretariat of CTBT organisation(CTBTO) Preparatory Commission initiated and developed tracking tools to monitor the activities of the nuclear weapons.

i.Various civil societies like NGOs and members of public persuade the government to sign and ratify the CTBT for the treaty to enter into force.

ii.The civil societies also urges the governments to support the Secretary General’s Five Point Proposal for Nuclear Disarmament to back the strong system of verification proposed by the UN.