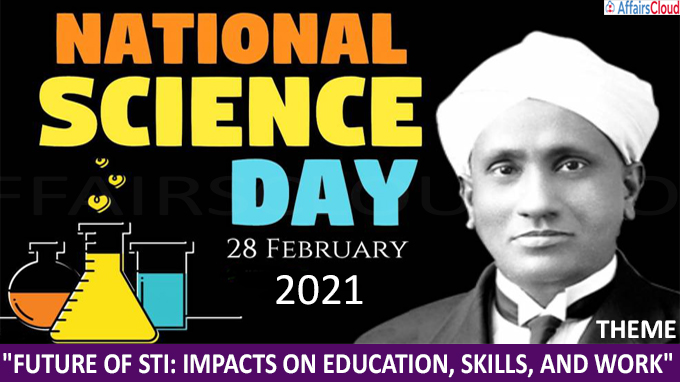 National Science day is annually observed across India on 28th February to commemorate the discovery of ‘Raman Effect’ by Indian Physicist Sir Chandrasekhara Venkata Raman(CV Raman) for which he was awarded the Nobel Prize in Physics in 1930.

The theme of the National Science Day 2021 is “Future of Science and Technology and Innovation(STI): Impact on Education, Skills and Work”.

The theme aims to raise the appreciation of scientific issues involved and the impacts of science on education skills and work.

i.In 1986, On NCSTC’s suggestion, the government of India proclaimed the 28th February of every year as the National Science day.

Sir CV Raman announced the results of the Raman Effect to the press on 28th February 1928.

iii.The database on the Indian Origin Academicians Abroad contains the information base of around 23472 Indian academicians and research scholars working abroad.

i.DST instituted the National Awards for Science Popularization in 1987 to encourage and recognise the contribution in the field of S&T popularization and communication and instill scientific temper among the masses.

ii.The award consists of a memento, citation and cash award.

i.Outstanding Efforts in Science & Technology Communication through Print Media including Books and Magazines:

iii.Outstanding Efforts in Science & Technology Communication in the Electronic Medium:

i.In the 2021 Union Budget, the Government of India has allocated Rs.50000 crore over 5 years for the National Research Foundation to support research in the field of Science.

iii.The Government has also implemented various schemes to encourage students and youths of India towards the field of S&T.

iv.The “Innovation in Science Pursuit for Inspired Research” scheme aims to attract, nurture and train the students to study science and take up careers in Research and development.

iii.The government of India honoured him with the Bharat Ratna, the highest civilian award in 1954. He was one of the first recipients (Chakravarti Rajagopalachari and Dr. Sarvapalli Radhakrishnan) of Bharat Ratan which was introduced in 1954.