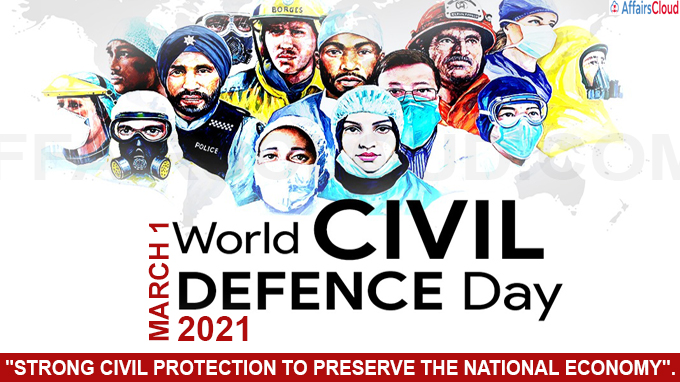 World Civil Defence Day is annually observed across the globe on 1st March to honour and signify the importance of civil protection. The aim is to bring the attention of the world public to the vital importance of Civil Protection.

The theme of the World Civil Defence Day 2021 is “Strong Civil Protection To Preserve The National Economy”.

i.To create awareness on the preparedness for self-protection and preventive measures to be taken in the event of accidents or disasters

ii.To pay tribute to the efforts and sacrifices of the national services responsible for the fight against disasters.

i.The World Civil Defence day was created by the General Assembly of the International Civil Defence Organisation (ICDO) in 1990.

ii.The day also marks the day on which the constitution of ICDO came into force as an intergovernmental organisation in 1972.

i.George Saint-Paul, a French Surgeon General created the Association des Lieux de Geneve in 1931 from which was the origin of ICDO.

ii.The ICDO was created to promote the creation of safety zones to protect vulnerable populations and historic monuments in times of war.

iii.In June 1935, the French parliament recognised the organisation and it achieved the intergovernmental organisation status in 1972.