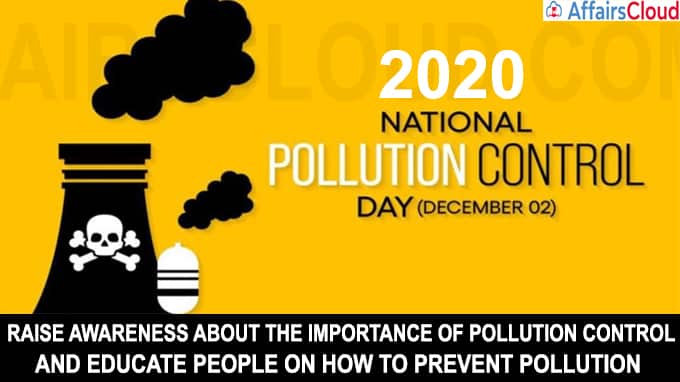 National Pollution Control Day is annually observed across India on 2nd December to honour the people who lost their lives in the Bhopal Gas Tragedy in 1984. The day is observed to create awareness among the general public about the pollution level of India and the rate on which the harmful substance level in the environment has been increased every year.

The theme of the 2020 National Pollution Control Day is “raise awareness about the importance of pollution control and educate people on how to prevent pollution”.

The day aims to create awareness about the importance of preventing air, soil, noise, and water pollution.

To educate people about the importance of pollution control act and create awareness about the industrial disasters.

ii.The methyl isocyanate (MIC) gas, a toxic gas spread across Bhopal and more than 5 lakh people were exposed to the gas and around 3700 people died due to the exposure.

iii.The survivors of the gas leak experienced the aftereffects, increased the cases of cancer and birth defects.

iv.The Bhopal tragedy is considered as one of the world’s worst industrial disasters.

i.The data of the National Health Portal of India states that more than 7 million people in India die every year due to air pollution.

ii.It also states that globally 9 out of 10 people do not have access to clean and safe air.

iii.The Central Pollution Control Board (CPCB) was constituted in India in September 1974 to work towards the protection of the environment.

iv.According to the State of Global Air 2020 report, the long term exposure to outdoor and household air pollution accounts to more than 1.67 million deaths due to stroke, heart attack, diabetes, lung cancer, chronic lung diseases and neonatal diseases in India in 2019.