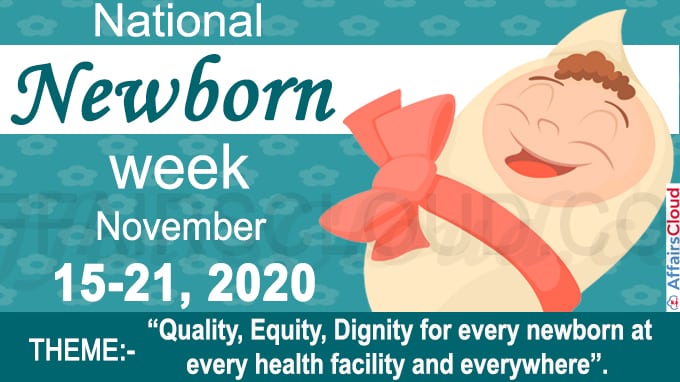 The National Newborn Week is annually celebrated across India from 15th November to 21st November to increase the awareness on the importance of newborn care for the survival and development of the newborn. The National Newborn week, dedicated to promote the reduction of newborn mortality rate in India. This was conceptualised by former Prime Minister Atal Bihari Vajpayee.

The theme of National Newborn Week 2020 is “Quality, Equity, Dignity for every newborn at every health facility and everywhere”.

To highlight the importance of newborn health as a key priority area of the health sector.

INAP is in line with the Global Every Newborn Action Plan(ENAP), working towards eliminating preventable deaths of newborns and stillbirth.

He released a detailed progress card on India Newborn Action Plan(INAP) (2014 – 2020) targets and roadmap plans and stated that India has achieved the targets of 2017.

According to the Sample Registration System(SRS), 2018 and United Nations Inter-Agency Group for Child Mortality Estimation (UNIGME) estimates the newborn mortality rate of India is around 23 per 1000 live births.

Key People at the event:

Initiatives of Government of India:

The government of India has launched various programs to ensure the survival and development of the neonates and newborns like Surakshit Matritva Aashwasan (SUMAN) scheme, National Nutrition Mission(NNM) Portal etc.