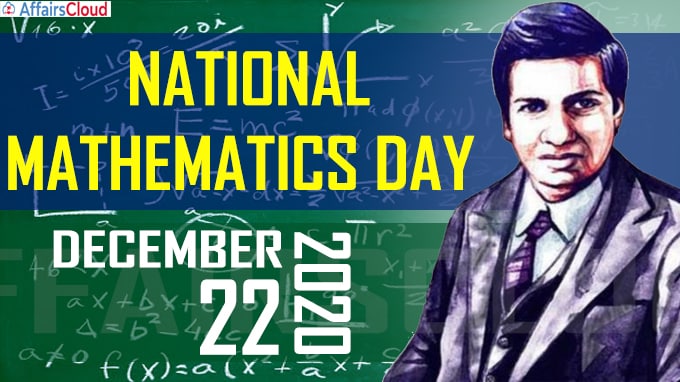 The National Mathematics Day is annually observed across India on 22nd December to mark the birth anniversary of the renowned mathematician Srinivasa Ramanujan. The day aims to create awareness among people about the importance of mathematics.

To honour and remember the contribution of Srinivasa Ramanujan in the field of Mathematics, on 26th February 2012, Former Prime Minister of India, Manmohan Singh decided and proclaimed the 22nd December of every year as the National Mathematics Day.

The 2020 SASTRA Ramanujan Prize (10000 USD) will be awarded to Shai Evra of Princeton University, United States and Hebrew University of Jerusalem, Israel for her research which concerns locally symmetric spaces of arithmetic groups and their combinatorial, geometric and topological structure.

ii.The award recognises the outstanding contributions in the field of mathematics by the mathematicians not exceeding the age of 32.

iii.The prize will be annually presented at the international conference organised by SASTRA in Kumbakonam, the home town of Ramanujan around his birth anniversary (22nd December).

i.Srinivasa Ramanujan Aiyangar was born on 22nd December 1887 in Erode district of the state of Tamil Nadu.

ii.He worked as a clerk in the Madras Port Trust from 1912.

iii.He sent the samples of his mathematical works to British Mathematicians, following which he was called to London.

iv.He joined the Trinity College in London in 1914.

i.He was elected as a member of the London Mathematical Society in 1917.

ii.He was elected as a fellow of the Royal Society in 1918.

His works and contributions:

iii.He has compiled around 3900 results and identities.