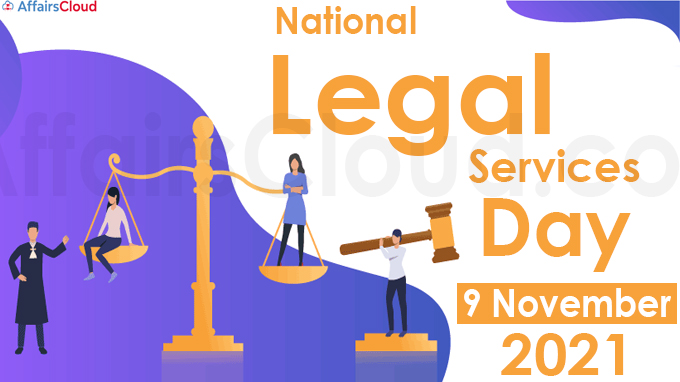 National Legal Services Day is annually observed across India on 9th November to commemorate the enactment of the Legal Services Authorities Act 1987 to provide a “statutory base to legal aid programmes” in India on a uniform pattern.

The day also aims to create awareness about the various provisions related to the Legal Services Authorities Act.

The National Legal Services Day was started in 1995 by the Supreme Court of India to offer legal services free of charge to people from the weaker and poorer sections of society.

The Legal Services Authorities Act was enacted in 1987 and came into existence on 9 November 1995 following a lot of deliberations and amendments.

The purpose of the Legal Services Authorities Act,

ii.NALSA was constituted to exercise the powers and perform the functions conferred on, or assigned to the Central Authority under this Act.

iii.The central authority consists of Patron-in-Chief (chief Justice of India), A serving or retired Judge of the Supreme Court (nominated by the President) who will be the Executive Chairman of NALSA and other members with experience and qualifications prescribed by the government.

State Legal Services Authority are constituted to exercise the powers and perform the functions conferred on or assigned to, a State Authority under this Act.

i.Lok Adalat is one of the alternative dispute redressal mechanisms, it is a forum where disputes/cases pending in the court of law or at the pre-litigation stage are settled/ compromised amicably.

ii.Lok Adalats have been given statutory status under the Legal Services Authorities Act, 1987.

iii.The decision made by Lok Adalats is deemed to be a decree of a civil court and is final and binding on all parties and no appeal against such an award lies before any court of law.